More Line Love, Graham Goes Boom With a Block, Don't Let the Pack Butter You Up, and Other Bears Bullets Skip to content 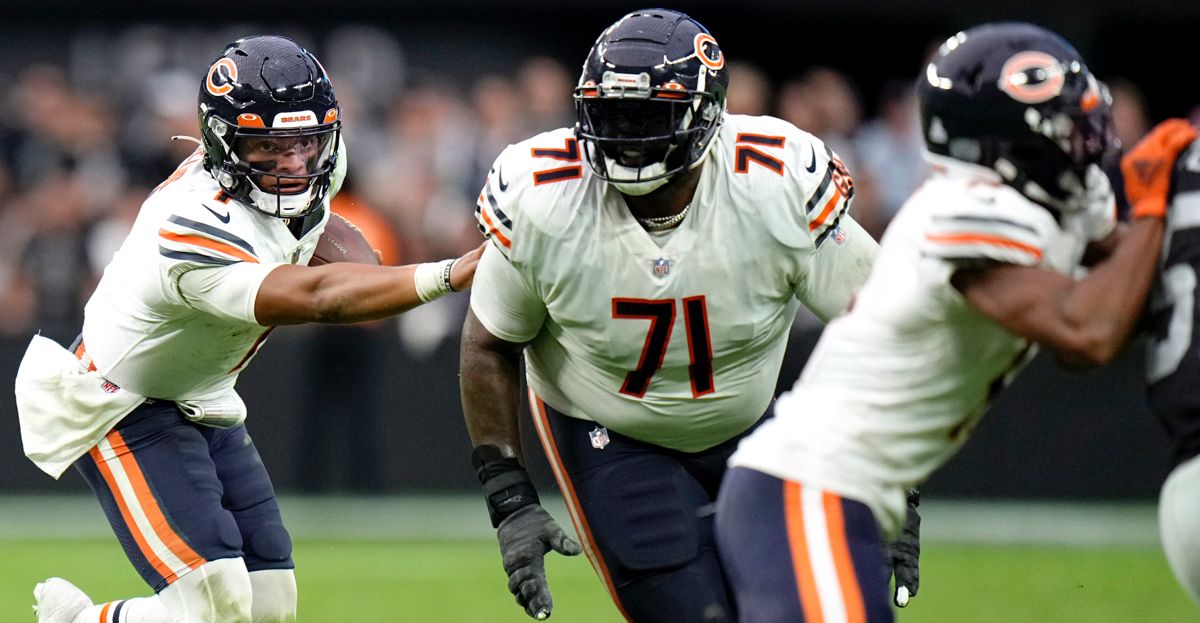 Today feels like one of those where I’m crunching a bunch of stuff in a small bag. But if I tell myself that I’ll read this story about the hedge fund gutting local newspapers at the top of Bullets, I’m more likely to circle back to read it. That’s because I often circle back to check in on Bullets as a refresher.

2nd & 4 – #Bears trying to finish off a W in the 4th quarter. Watch Jimmy Graham (far right on the screen). pic.twitter.com/nqi0heqWij

•   Admittedly, I’ve been wary of using Graham between the 20s. At age 34, the expectations simply aren’t high for the five-time Pro Bowl tight end who was a game-changer at the peak of his powers. However, part of me thinks he can still be a useful piece to the puzzle. Aggressive blocks like the one seen above serve as a reminder that Graham still has it when given opportunities. Perhaps the next step for this offense is to use him as a pass-catcher. Give him some routes that allow him to use his body against smaller DBs in space. Hey, it can’t hurt!

•   You couldn’t ask for a better person to break down the Bears’ newfound blocking excellence than Tom Thayer:

•   There are dissenting opinions on if Chicago’s offensive line is good or not. And I think we’ll get a better grasp of things with the more reps this group takes together. Remember, this unit wasn’t altogether until the final preseason game. And they played just one half of football. Offensive lines are units that need game reps in order to get to know each other, how to play alongside one another, and to build up a lather. This group will be challenged now that another new starter is entering the mix. But the line has put together consecutive solid performances since the Cleveland debacle. And that should count for something.

•   Expect Elijah Wilkinson a.k.a. #70 to start in place of Germain Ifedi at right tackle. Wilkinson has previous starting experience with the Broncos and was brought in to be an upgrade from Rashaad Coward, who had minimal offensive line experience (let alone starter’s reps) despite his role as swing tackle. These are obviously big games for the Bears coming up, starting with Sunday’s tilt against the Packers. But these are also showcase games for players like Wilkinson. The NFL is a next-man-up league, and this is Wilkinson’s chance to put some good tape out there to prove his value is more than that of a swing lineman. Let’s see what one of this offseason’s additions is made of when the lights go on.

•   Justin Fields is getting a knack for this, but I’d like to see some of these throws get brought in by pass-catchers:

for the second straight week, arguably Justin Fields' most impressive throw fell incomplete as the receiver was unable to make a play. first it was Cole Kmet, this week it was Allen Robinson pic.twitter.com/6s2vKAAlpI

•   A thread of optimism from Bears fans is what I needed after realizing I ran out of coffee K-cups this morning:

Davante Adams asked about the Packers-Bears rivalry: “I hate everybody that I play against.” pic.twitter.com/SesR1EpS9T

"It doesn't take long to figure out how important Bears week is to both fan bases around here.. when Favre got the mantle we were 15-20 back in the standings & I'm happy to say we're now up in the all time standings" ~@AaronRodgers12 #PatMcAfeeShowLIVE pic.twitter.com/095gr3zjsc

Here’s Aaron Rodgers on playing in Chicago, growing up a fan of the Bulls and whether he would ever join the Bears. (Via @packers) pic.twitter.com/0rRshHy4C8

•   This throwback clip found its way onto my Twitter timeline, so I feel it is important to share with you here:

•   Things that should’ve happened a long time ago:

There will never be another 21 💛

On Sunday, we will officially retire Sean Taylor's number

•   I have questions, comments, and concerns regarding the Cubs’ new GM hire. But I also don’t know much about Carter Hawkins, so I’ll reserve some judgment until this move becomes officially official:

•   The vibes aren’t great after the Blackhawks lost in their regular-season opener. But just as Rome wasn’t built in a day, champions aren’t crowned on Opening Night. Although, there were a great many things that were concerning about last night’s contest. Here’s hoping Stan Bowman has timely answers that work:

Stan Bowman Speaks: Too Many Goalies? Dylan Strome and Morehttps://t.co/1XVvl88lWQ

•   Vaughn McClure, a teammate of mine at the Tribune where he covered the Bears (and others), tragically passed away lsat year. Tonight, there is a benefit in his honor:

Tonight in Chicago is the first annual @vmcclurenation Benefit, which will celebrate the life of our former ESPN NFL Nation reporter who is greatly missed. You can support Vaughn's foundation and the causes that were dear to him here (via @hburns33): https://t.co/d9HzABCwG0 pic.twitter.com/zuFjQyptXH