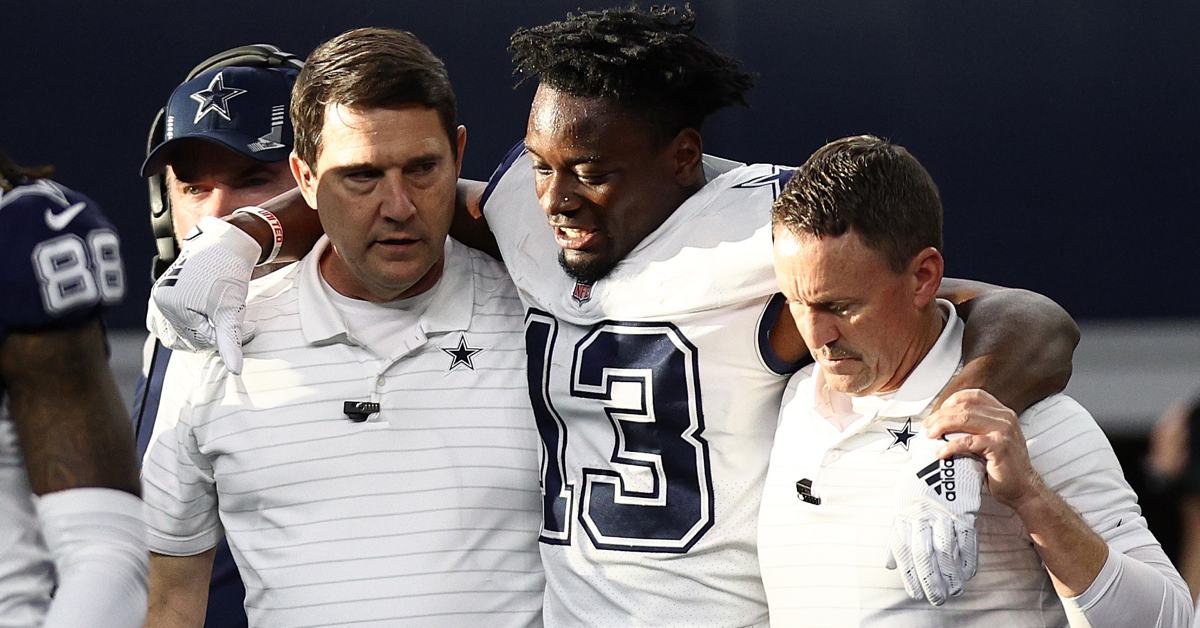 It pains me to say it, but I cannot tell a lie. The Dallas Cowboys offense has been fun to watch this season. A healthy Dak Prescott with a tag-team backfield of Tony Pollard and Ezekiel Elliott, plus a trio of alpha receivers in hot-to-trot head-coaching candidate Kellen Moore’s scheme makes for some fun times lighting up scoreboards.

One of those receivers is Michael Gallup, a fourth-year player who was a third-round pick in the 2018 NFL Draft. Gallup might be WR3 in the pecking order, but he makes some tip-top plays when he gets targets in his direction. Take for example this touchdown snag:

Gallup was slow to get up after this score, was helped to the sidelines, and eventually sent to the locker room after being quickly ruled out for the rest of the game.

Unfortunately, the injury Gallup sustained was a serious one:

#Cowboys WR Michael Gallup, who was quickly ruled out today, suffered a torn ACL, owner Jerry Jones told reporters. Assuming the MRI confirms, he’ll be out for the season.

Ooooooof! A torn ACL ending Gallup’s season stings on multiple fronts. For the Cowboys, quarterback Dak Prescott loses a trustworthy target just before the start of the postseason. But the bigger gut-punch here is for Gallup himself. The free-agent-to-be had been quite productive since his return from an IR stint due to a calif injury earlier in Week 1. In his last eight games, Gallup put up 31 catches, 409 receiving yards, and two touchdowns. That would put him at a 66-catch, 868-yard, 5 score pace over a full 17-game season.

Those are respectable numbers. And while he might’ve been a third option among Dallas receivers, it’s easy to dream on what Gallup could do if given a larger target share. Especially if you’re a team like — oh, let’s say the Bears — a receiver-needy bunch who could use someone with starting experience and a high floor (1,107 receiving yards in 2019) who also possesses untapped upside and potential. Gallup’s recent efforts put him back in the front of our mind in early December, but he’s been on our radar as a Bears fit since he was PFF’s top receiver prospect ahead of the 2018 NFL Draft. Much like in 2018, the Bears will enter the 2022 offseason searching for receiver help. And Gallup, who will play in his age 26 season in 2022, makes so much sense as a logical fit.

It is a bummer, but the reality is Gallup’s injury will have an impact on his free agent market. However, we’ve seen players coming off ACL injuries still secure the bag. Remember when the Bears were willing to roll the dice on Allen Robinson during the 2018 offseason? That’s when Robinson was recovering from an ACL injury of his own. Robinson’s deal was a three-year pact worth $42 million and came with guarantees in the $25 million range. Perhaps that might be the type of deal Gallup could secure this offseason.

In any case, we wish Gallup a speedy recovery. Here’s hoping this is just a minor setback that sets up a major comeback.