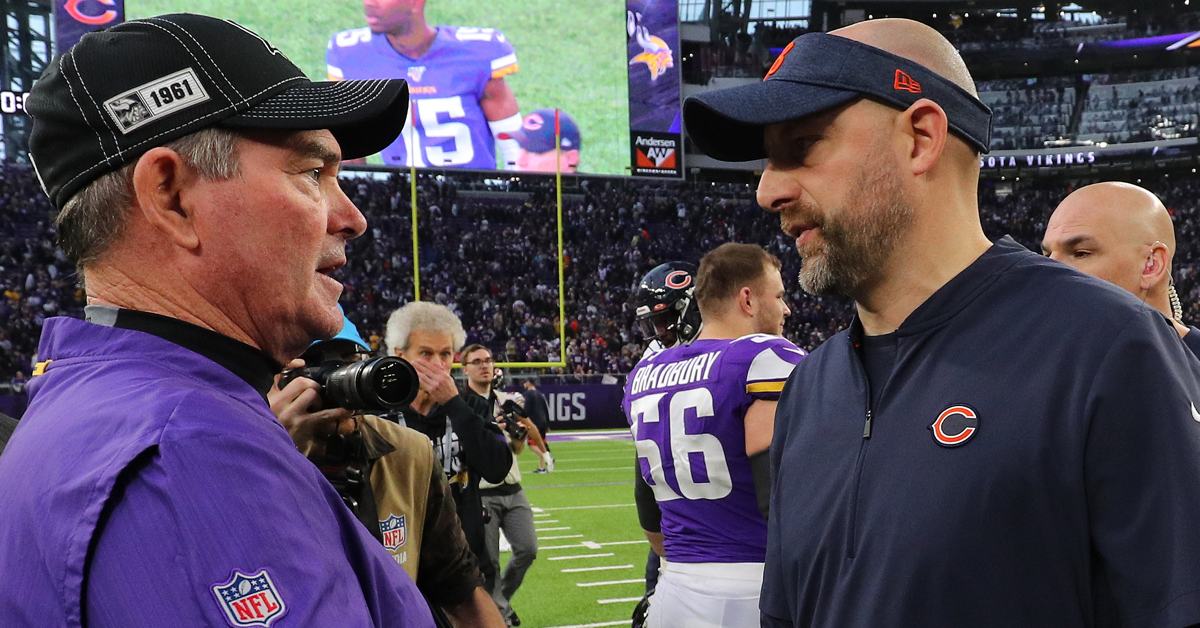 The first Monday after the end of the NFL’s regular season is here, and changes are happening across the league.

It’s a tradition unlike any other. Kinda like The Masters. But in the dead of winter. And with folks in charge of fielding teams responsible for scoring an oblong object instead of driving a tiny dented ball.

In case you weren’t up to speed, the Chicago Bears are among the teams making changes today. Head Coach Matt Nagy has been shown the door after four seasons as head coach. General Manager Ryan Pace has also been sent packing after his seven-year run in Chicago. But that’s just the beginning.

We’ll update this post continually as the day rolls on.

As is the case in Chicago, it’ll be a brand new regime in Minnesota when things kick off in 2022:

Head Coach Mike Zimmer *AND* General Manager Rick Spielman are out the door in Vikings country. Minnesota sent the two out with a come-from-behind win against the Bears on Sunday, but it wasn’t enough to save either job.

The win allows Zimmer to avoid coaching the franchise’s first 10-loss season since 2013, while wrapping up his career mark at 72-56-1. Zimmer, 65, could be a solid defensive coordinator candidate should he want to return to coaching immediately. The Illinois State product has ample experience running defenses in Dallas (2000-06), Atlanta (2007), and Cincinnati (2008-13). So there is a real chance he lands on his feet in that role somewhere, should he choose that path.

Beating the Bears also put a cap on Spielman’s run in Minnesota. As the top dog with the GM and Executive VP titles, Spielman’s Vikings went 132-123-2 from 2006-21. Minnesota made the playoffs six times during Spielman’s tenure. But missing the postseason in three of the last four years (including each of the last two seasons) pushed this thing over the edge.

Spielman, a Southern Illinois University grad, has prior ties to the Bears. If you’ll recall, he was the Bears’ Director of Pro Personnel from 1997-99 before moving onto the Dolphins (VP of Player Personnel, Senior VP of Football Operations, GM) from 2000-04. Considering how the Bears should cast a wide net in their search to replace Pace (and perhaps shake up the entire front office), the McCaskey family could do worse than kick the tires on Spielman’s situation.

Brian Flores Unexpectedly Out in Miami

Black Monday always comes with at least one surprise. And because I didn’t see this one coming, it counts:

A statement from Brian Flores provided to ESPN: pic.twitter.com/CFRUEQGo3r

Brian Flores is no longer coaching the Dolphins, amidst what is reportedly a power struggle in Miami. Flores, 40, went 24-25 in three years as the Dolphins’ head coach. But it is worth noting his team rebounded from a 5-11 first season to winning 10 games in 2020 and nine more in 2021. That 2021 season was a ride, as it featured a seven-game losing streak early before rallying for a 7-game win-streak that brought them back into the thick of the AFC playoff hunt.

The expectation is that Flores will be a “prime candidate” to get head coaching interviews during this upcoming hiring cycle, per ESPN’s Adam Schefter. Frankly, the Bears should put in a call and check in regarding Flores’ interest in their opening. The general reviews regarding Flores are positive, despite how things came to an end in Miami.

Updates as We Roll Through…

•   When news came through regarding Flores’ departure, my mind immediately went to Miami being a possible landing spot for Jim Harbaugh. Instead, that won’t be the case:

"I'm not going to be the person to take Jim Harbaugh from the University of Michigan." https://t.co/wpwiSVDnY8

Dolphins owner Stephen Ross is a Michigan grad whose pursuit of Harbaugh when he was Stanford’s coach made me think that possibility was real. But Ross put an end to that quite quickly.

•   The Broncos got the ball rolling on Sunday, cutting ties with Vic Fangio:

“George will have full authority to select the next head coach of the Broncos. This is his decision and his program.”#Broncos Pres./CEO Joe Ellis on parting ways with Vic Fangio: pic.twitter.com/a6rgUrqFof