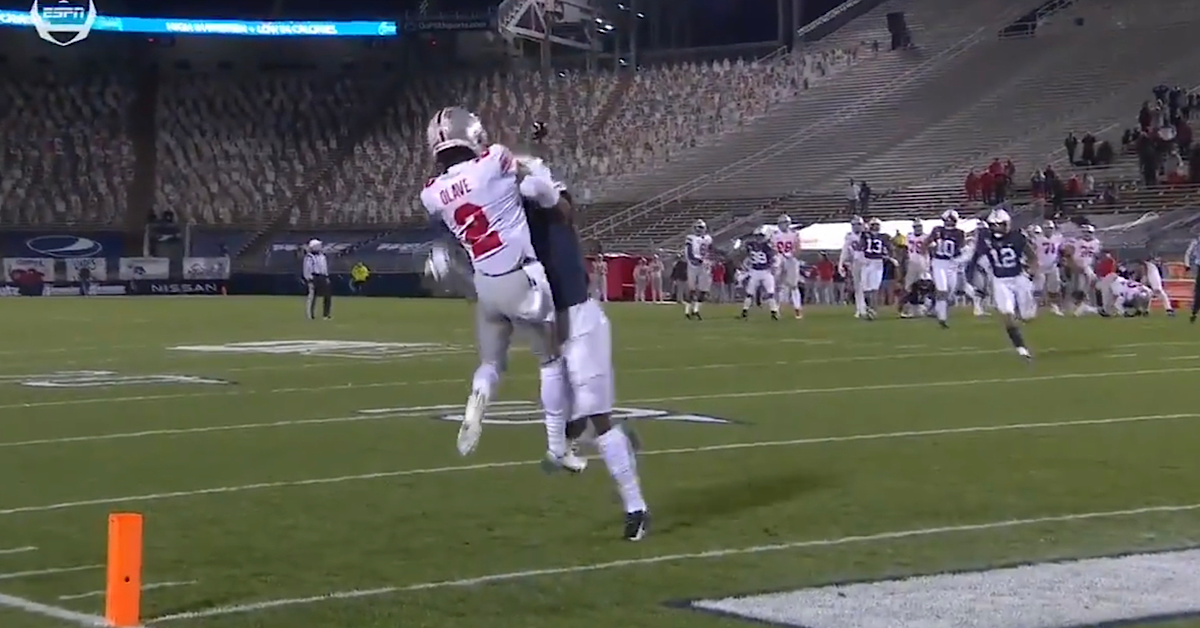 In addition to addressing needs along the offensive line, one narrative we’ll follow obsessively over the coming weeks and months is the Bears’ quest to find Justin Fields some pass-catching help. And in one recent mock NFL Draft, the Bears find themselves copying a Super Bowl caliber blueprint.

And with that, we would get the beginning of the will Chris Olave to Justin Fields what Ja’Marr Chase is to Joe Burrow? narrative. In all honesty, I’m all for it.

Even it will make this snapshot all the more relevant to our interests:

Ja’Marr Chase already was behind Jalen Ramsey on a go route when Ramsey fell on the fourth-and-1 game ender. If Burrow had a sliver more time … pic.twitter.com/uQfgqZ88P4

As someone who could’ve won $100 on a $5 bet with 20-to-1 odds had the Bengals won the Super Bowl, this screen grab stings. I can’t imagine how Cincinnati fans feel, but I don’t want to do so. After all, I’ve lived through the double-doink. And as Bears fans, we’ve been living through some rough times of our own. Let’s be real. There’s no time to feel sorry for yourself in this NFL, let alone another team. Anyway, let’s get back to Olave and the potential of the Bears running a successful version of the play above in a Super Bowl in the not-too-distant future.

Olave, 21, is one of the most-accomplished draft-eligible receiver prospects. And if he was to slip to the Bears in Round 2, it would be one heckuva steal.

The 6-foot-1, 188-pound OSU product was a second-team All-American in 2021 and a first-team All-Big Ten receiver in each of the last two seasons. Olave put up 65 catches, 936 receiving yards, and 13 touchdowns last season. But it’s what Olave did in 2019 and 2020 when Fields was slinging it that should turn heads (at least, for the sake of this conversation). In 2019, Fields’ first year as the Buckeyes’ starting quarterback, Olave put up 849 receiving yards and 12 touchdowns on 49 catches. A year later, in a pandemic-altered shortened-season, Olave caught 50 balls for 729 receiving yards and 8 touchdowns. It was easy to dream on a possible 100-catch, 1,400-yard, 16 TD season with a full year based on the extrapolation of those numbers. And while Olave fell short of those numbers, his excellence as a receiver was still evident.

Hence, the heightened intrigue of Fields and Olave linking up in Chicago thanks to some fortuitous draft bounces.

Seriously, how could you not have an interest:

The Joe Burrow to Ja’Marr Chase connection translated well into the NFL.

I hope the Bears take notice and draft Chris Olave for Justin Fields.

Their first pick is in the early-second round and Olave should still be there.pic.twitter.com/tnc1kJhehu

They make it look so easy.pic.twitter.com/zPOGTQaKfx

I love how Fields has enough faith to feather this ball in there. He’s trusts that Olave can hit the boost button and beat his man, and he does just that.pic.twitter.com/TdA6scZ4t7

Yes. Please. Bring it to me.

And yet, I come back to the Burrow-Chase snap shot as an image that should get Bears fans thinking about their team’s future. More specifically, how the front office builds out moving forward. Chicago’s football team plans on building around Justin Fields skills and talents. But to properly do that, it needs to assemble a collection of play-makers. Guys like Ja’Marr Chase (the subject of the image/tweet above) don’t grow on trees. However, I imagine teams around the league began thinking of ways to replicate the Bengals blueprint. Watching Joe Burrow stump for his LSU teammate, then seeing the Bengals thrive after bringing him in should be inspiring. Frankly, I’d bet on the Bears being one of those teams. And in Reuter’s mock draft, the team is able to copy it to a tee.

Of course, the challenge here might be in Olave making it out of the first round. Then again, not every first-round caliber receiver will go in Round 1. Not unless 15-20 teams take receivers with their first-round picks. So, let’s keep that in mind before we start with the there’s no way that guy gets out of Round 1 when every year we see multiple versions of “that guy” slip to Round 2.

The cherry on top would be if Reuter was also successful in nailing Chicago’s third-round choice. With the 71st overall pick, Reuter sends Minnesota offensive tackle Daniel Faalele to the Bears. We already know the Bears have offensive line needs. And if you don’t understand the importance of following the selection of stud a stud receiver with a pick that provides protection for Fields, please see the tweet above. Thank you.

We’ll tend to gravitate toward these multi-round mocks in the lead-up to the 2022 NFL Draft, especially since the Bears don’t have a first-round pick. And when they have the Bears making picks like the ones Reuter projects, it’ll definitely have our attention.