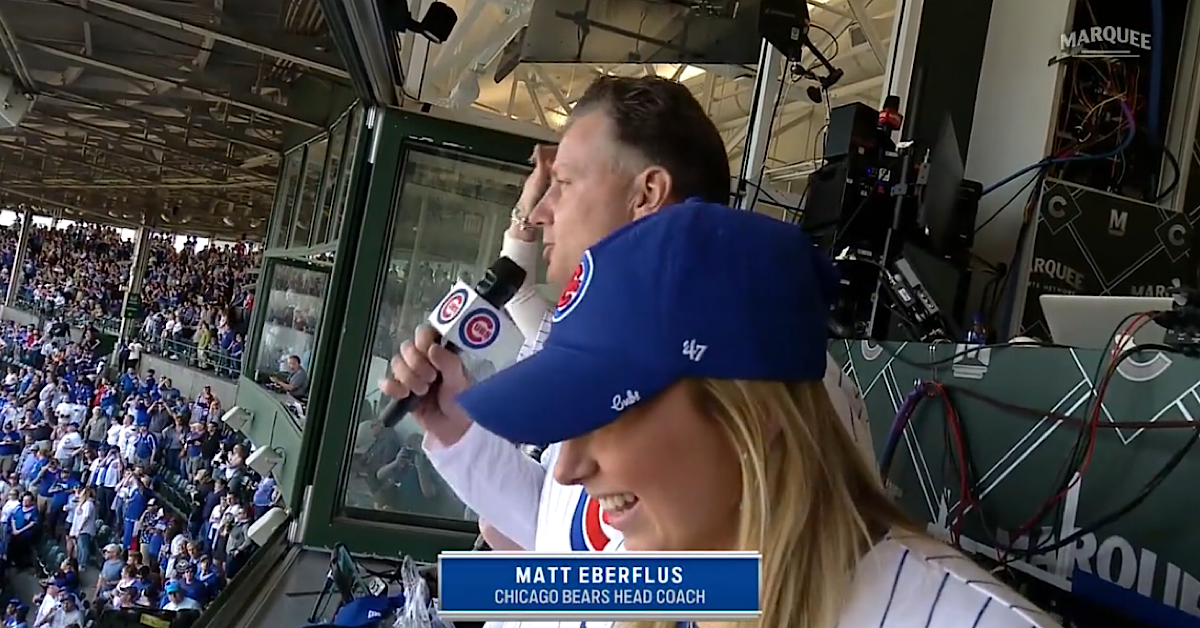 Matt Eberflus shows up at Wrigley Field and the Cubs put up a 21 spot in a shutout win.

“My dad used to always tell me this, he said I had a horseshoe up my keister,” Eberflus said, via the Bears’ official website. “so I think I am a little bit of good luck.”

Good luck and a sense of humor. Eberflus can have this city eating out of the palm of his hand if he can stack up some successful seasons. Heck, he is already doing more for the offense in Chicago than we expected.

Now, get that man over to United Center before the Bulls tip at noon.

•   You already know what my answer to this will be:

•   So … how does one qualify for a breakout? I suppose projections would be helpful. ESPN has early fantasy projections, which could be helpful in laying out what the future could look like for Justin Fields and Darnell Mooney.

•   For Fields, it looks like a step forward is on the horizon. A 3,625-yard, 19 TD season to go along with 99 carries, 578 rushing yards, and 3 rushing scores would be neat. Increasing his completion percentage (58.9% to 63.01%), TD% (2.6% to 3.7%), and decreasing the INT% (3;7% to 2.9%) would all be welcome signs. And while that 84.3 passer rating wouldn’t be much to write home about, it would mark a significant improvement from the 73.2 he put up as a rookie. The 15 interceptions still feels too high for my liking (especially with the passing TDs number not surpassing 20). But in the end, it is more about how Fields looks in getting those numbers than it is getting to those statistical benchmarks.

•   Judging by ESPN’s projections, it looks like Mooney will be *THE* beneficiary of Fields’ improvements. Forecasting an 81-catch, 1,164-yard, 5 TD season to give Mooney consecutive 1,000-yard receiving campaigns eases my mind when it comes to a potential fall-back season after a breakthrough 2020. More of this, please:

This angle of the Fields to Mooney TD. 🚀

•   And, for whatever it’s worth, ESPN’s Mike Clay has Fields as his QB18 and Mooney as his WR24. Mooney checks in ahead of receivers such as Mike Williams (25), Amari Cooper (28), JuJu Smith-Schuster (29), Christian Kirk (38), and Allen Robinson II (44). Four of those players switched teams this offseason. While a fifth (Williams) secured the bag with a mega deal from the Chargers and avoided getting Franchise Tagged. In other words, Mooney finds himself hanging with good company here. To be clear, fantasy football projections and real-life value don’t always intersect. And they don’t always intersect at where we want. But if Fields and Mooney show growth that matches the projections, I think there is a real chance we’ll come away happy with how things turn out.

•   I love that the offseason work Mooney and Fields are putting in is being seen as beneficial. “We grew on the field and off the field, learned [about] each other more than what we knew of each other,” Mooney said (via the Bears). “I was staying with him at the time, so [we were] just sitting in the house whenever we were done working out just talking, communicating just about life and football and what we were expecting throughout this season.”

•   Sorry if you saw some pics online and thought Larry Ogunjobi was about to be a member of the Bears. Turns out the free agent defensive tackle was working out in Miami:

•   As a reminder, the Bears still have an interest in signing Ogunjobi. Yes, even after failing a physical and voiding his contract, GM Ryan Poles said he would still consider bringing in a player who figures to be a solid upgrade to the middle of someone’s defense. Although, I wonder if there are hard feelings on Ogunjobi’s end after watching a market-setting contract get taken off the board at what seemed to be the last second due to a physical.

•   An Ogunjobi signing has the potential to be a fun one, but he isn’t the only notable free agent who could walk into a starting role. Ian Wharton (Bleacher Report) rattles off a handful of players who fall under the umbrella of being underrated free agents who are worthy of starting roles. Among feasible Bears targets include receiver Will Fuller V and offensive lineman Ereck Flowers. Fuller struggles to stay healthy, but would be the most intriguing possible free agent target remaining. His skill set could bring a much-needed vertical threat that the Bears could put in tandem with Mooney and a draft pick to be chosen next weekend.  At minimum, it’s a name to keep in mind as the offseason chugs along.

•   That crazy story about Tom Brady’s wacky plan to have an ownership share for the Dolphins and play for them continues to linger:

Report: The #Dolphins planned to trade a 2nd round pick for Tom Brady and a 1st round pick for coach Sean Payton.https://t.co/btssYiN5Rm pic.twitter.com/zXcgg5UD8Z

They came for baseball and a football game broke out. 🐻 ⬇️ pic.twitter.com/dtfxAriVs9

Coach Eberflus sings the stretch at Wrigley and the Cubs put up 3 touchdowns. Can only mean good things for the Bears this fall. https://t.co/WpDjmX7OQ4

Friday is in the past.

Got to come out the most locked in we’ve seen them this series. Can’t let Milwaukee look that comfortable again on your home court.