Whenever Roquan Smith Takes the Field, He'll Line Up as the Bears' WILL Linebacker Skip to content 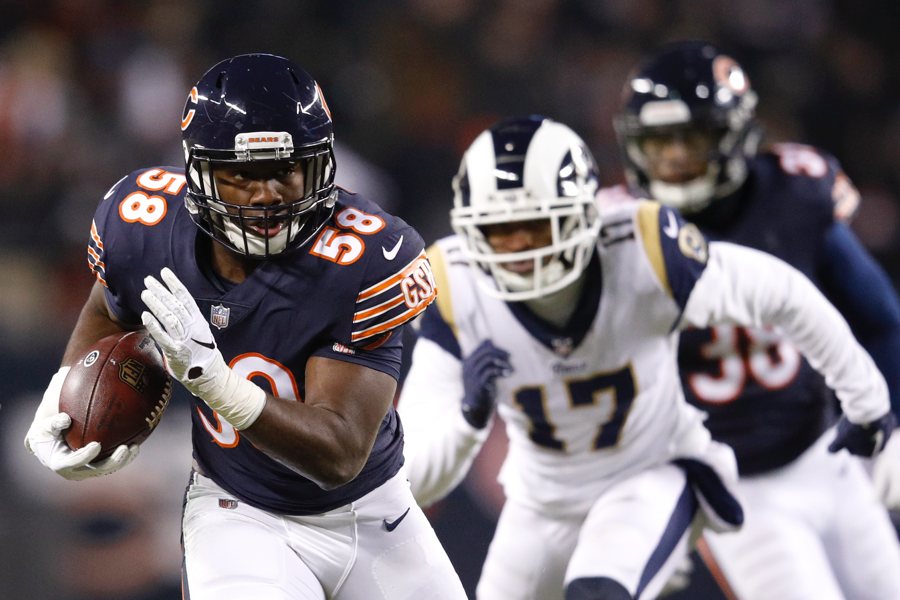 Go figure that we’ll know where Roquan Smith will play before when we know he’ll play.

That’s because Head Coach Matt Eberflus has already laid out a plan for his star linebacker:

On Wednesday, Eberflus told 670 The Score’s Mully and Haugh Show that Smith will line up as the Bears’ WILL linebacker this upcoming season. A move to the weak-side linebacker spot represents a bit of a change for Smith. If you’ll recall, Smith had inside duties in previous iterations of Chicago’s defense. But the flip from a 3-4 look to a 4-3 base has Smith in a slightly different spot. But Bear Report’s Zack Pearson notes that Smith was at the WILL linebacker spot throughout the offseason. It’s just that it wasn’t until Wednesday when Eberflus came through with a confirmation. Better late than never, I guess.

For what it’s worth, Colts.com writer/former Bears beat reporter/noted Simpsons enthusiast JJ Stankevitz notes that Roquan’s new position is what Shaquille Leonard has been playing in Indy. You might know Leonard by “Darius,” which is the name he went by from 2018-21, a four-year stretch in which he made four Pro Bowls, earned first-team All-Pro honors three times, and collected at least 121 total tackles in each season. Also? It was a position that led him to cash in with a major extension. I’m not saying that plays a role in negotiations. However, it should give anyone monitoring the situation a better idea of what the price of doing business will be.

Smith is currently sitting on the physically unable to perform list as his contract issues remain unsolved. Admittedly, it’s a bummer that we likely won’t see Smith on the field until he signs an extension. Watching him at camp has been a treat in past years. But getting clarity on his position moving forward is a nice morsel of information. Because not only does it inform us about the team’s plans with Smith, but it also gives us an idea of how other LBs will lineup. Most notably, free agent addition Nicholas Morrow is first up to handle MIKE duties in the middle. I’m looking forward to seeing how it all shakes out now that the pieces are finding their new places.

Of course, Roquan Smith needs to be on the field for any of this to matter.