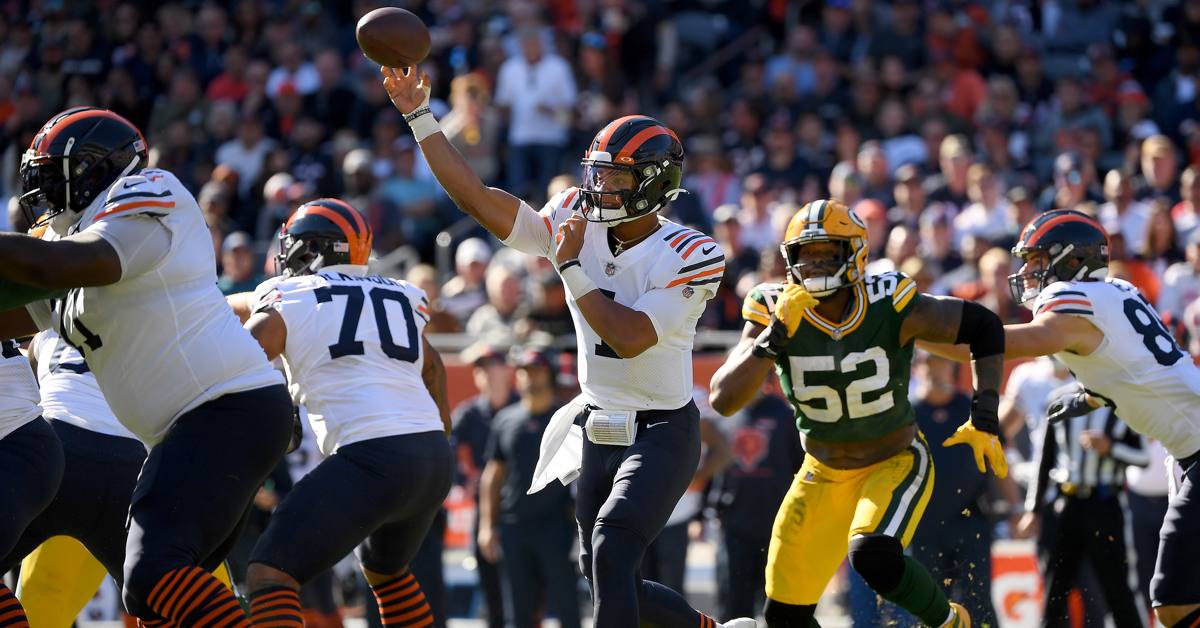 I’ve been thinking this week about how much the goal posts have moved when it comes to the Packers dominance over the Bears. Perception-wise, of course. Green Bay has still won the last seven meetings and 12 of the last 13. Until Justin Fields and the Bears actually beat the Packers, it’s Green Bay’s rivalry to boast.

Or, as Aaron Rodgers loves to say, he owns the Bears until Fields and Co. prove otherwise. But, if for no other reason than the Packers downfall this season, and Fields’ stock shooting up the charts. There’s optimism that day might be coming sooner than later.

This might be Fields’ last chance to beat Aaron Rodgers head-to-head in this rivalry because who knows if Rodgers will be in Green Bay beyond this season. Wouldn’t it be nice to see Fields and Co. send Rodgers off from his final game at Soldier Field in a Packers uniform with a loss?

For this week’s Bears Rewind, we travel back to last fall when Justin Fields made his debut in the NFL’s oldest rivalry at Soldier Field.

I watched this game at Nisei Lounge with Luis and CHGO’s Kevin Kakuk, among others, and Fields played pretty well, considering the stakes and circumstances. In his fourth career start, Fields completed 16-of-27 passes for 174 yards, a touchdown, and an interception while picking up 43 yards on six carries on the ground.

The Bears even got off to an early lead thanks to a Khalil Herbert rushing touchdown in the first quarter. That Herbert touchdown came via an 80-yard drive orchestrated by Fields on the Bears first possession of the game.

But, it was all Packers for the next two quarters with Aaron Rodgers throwing a pair of touchdowns — one in the second quarter to Allen Lazard and the other in the third quarter to Aaron Jones — and Mason Crosby adding a field goal for good measure to make it 17-7 Green Bay heading into the fourth quarter.

Justin Fields did throw a touchdown pass to Darnell Mooney to pull the Bears within a field goal in the fourth quarter, but, well, you know the rest.

The point of circling back to this game, is that even though the Packers got the last laugh, the gap felt a whole lot closer than it had in years past. In the year-plus since, it feels even smaller.

Overall, Fields hasn’t been great, but he hasn’t been terrible in his previous three starts against the Packers (two in Green Bay, one in Chicago):

I sure wish I felt better about Fields’ health coming into this one — and missing Darnell Mooney, Khalil Herbert, Jaquan Brisker, Kyler Gordon, and more certainly doesn’t help things — because I think that we might have been treated to statement win against the Packers at Soldier Field this week if circumstances were more ideal.

And who knows, we still might. It sure would be nice. Either way, the tides are changing in this rivalry.

Also, if you’re looking for more Bears-Packers history, Jack Silverstein’s complete history of the rivalry is as comprehensive as it gets: