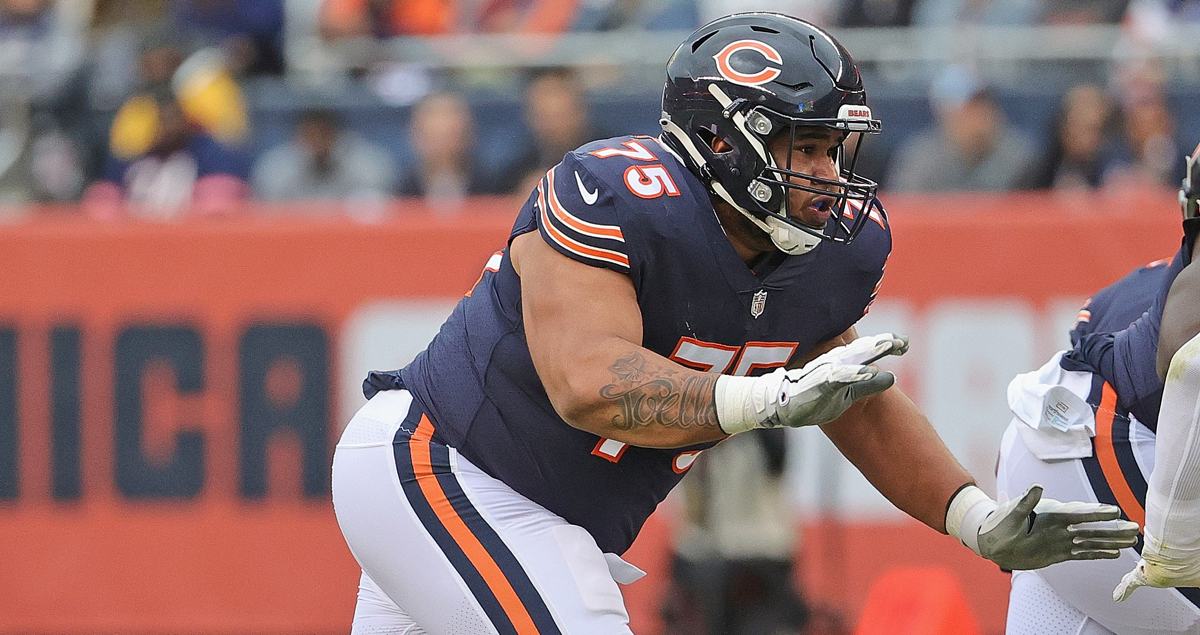 Pro Football Focus raised eyebrows recently, placing the Chicago Bears offensive line in the top 10 of its rankings. Unfortunately for Justin Fields, that group did not look the part on Sunday against the Philadelphia Eagles, as Fields took six sacks and six more quarterback hits.

And after further review of the game tape, PFF put no blame on Fields for any of the sacks, hits, or pressures that he faced on Sunday. Simply put, that did *NOT* look like a top 10 offensive line — by any measure.

But for what it’s worth, it sounds like changes are on the horizon as the Bears enter their Week 16 matchup against the Buffalo Bills with Alex Leatherwood, Riley Reiff, and Larry Borom getting work as interior linemen during practice:

To be clear, a main reason the Bears are playing musical chairs with their interior linemen is because of injuries throughout the offensive line. Right guard Teven Jenkins (neck) was a limited participant during Tuesday’s practice, which was nothing more than a walk-through as the team prepares for game day on a short week. Meanwhile, left guard Cody Whitehair didn’t practice at all due to a knee injury. A knee injury keeping Whitehair from practicing could be a sign that he won’t be able to give it a go on game day. And even though Jenkins was practicing with limitations, it might be wise to get him off his feet for a week and re-assess his status for the final two games of the season starting next Monday.

A Game of Musical Chairs

Mixing and matching along the offensive line this time of year is suboptimal. Particularly when the No. 1 objective should be to protect quarterback Justin Fields at all costs. But there could be a benefit from throwing stuff at the wall in the offensive linemen’s room and seeing what sticks.

Alex Leatherwood could conceivably be a fit inside or out. Leatherwood followed his 10-snap debut in Week 13 against the Packers with a 17-play cameo in last week’s game against the Eagles. Unfortunately, Leatherwood wasn’t as good against Philly as he was against Green Bay. And the sacks and pressures he gave up were ugly. But that doesn’t mean he can’t rebound. However, what is unknown is what position he’ll be working at this Sunday. The Bears could trot Leatherwood out at right tackle again. Or the team could try to catch lightning in a bottle twice by moving Leatherwood inside to guard. You know, the same way they did with Jenkins over the summer. Leatherwood has guard experience at both the college and pro levels. Perhaps this is the way to go.

Larry Borom also has experience starting at guard and tackle. Borom has been primarily a tackle in this offensive scheme, with PFF ranking Borom as OT42 (among 81 qualifiers). That puts him smackdab in the middle of the pack at the position. When Borom was coming out of college, some thought he would be better off moving inside. Maybe that kind of move unlocks something in Borom down the stretch.

Riley Reiff is a tackle by trade with expereince on both sides of the line. Reiff has a lot going for him if the Bears are also willing to make him available inside. Just think of the possibilities of having an offensive lineman who is willing (and able) to hold his own at four different offensive line positions.

Michael Schofield surprisingly checks in as PFF’s No. 23 highest-graded guard. Schofield’s 68.4 grade checks in just behind Indy’s Quenton Nelson (68.9) and ahead of (old friend alert) Pittsburgh’s James Daniels (66.6). Can’t say I saw that coming. ESPN has Schofield as having its fifth best run-blocking win rate as a guard. So if the Bears want to continue leaning into the run game, it might be wise to keep Schofield in mind as part of any rotation.

In the end, I don’t have a combination I’d like to set in stone in terms of what the Bears’ offensive line should look like moving forward this season. But I’ve ultimately come to the conclusion that this group isn’t worthy of the top 10 ranking PFF recently gave it. And I don’t believe its ESPN Pass Block Win Rate grades out as the second best through this point of the season, even if that 69% win rate is suggests things are going nicely for the Bears. This offensive line might not be an albatross right now, but running it back next year could serve as an anchor that holds back this offense’s potential. Ideally, the Bears find some short-term answers for the rest of the season and then figure out what it means for the future when we put a bow on this thing after Week 18.