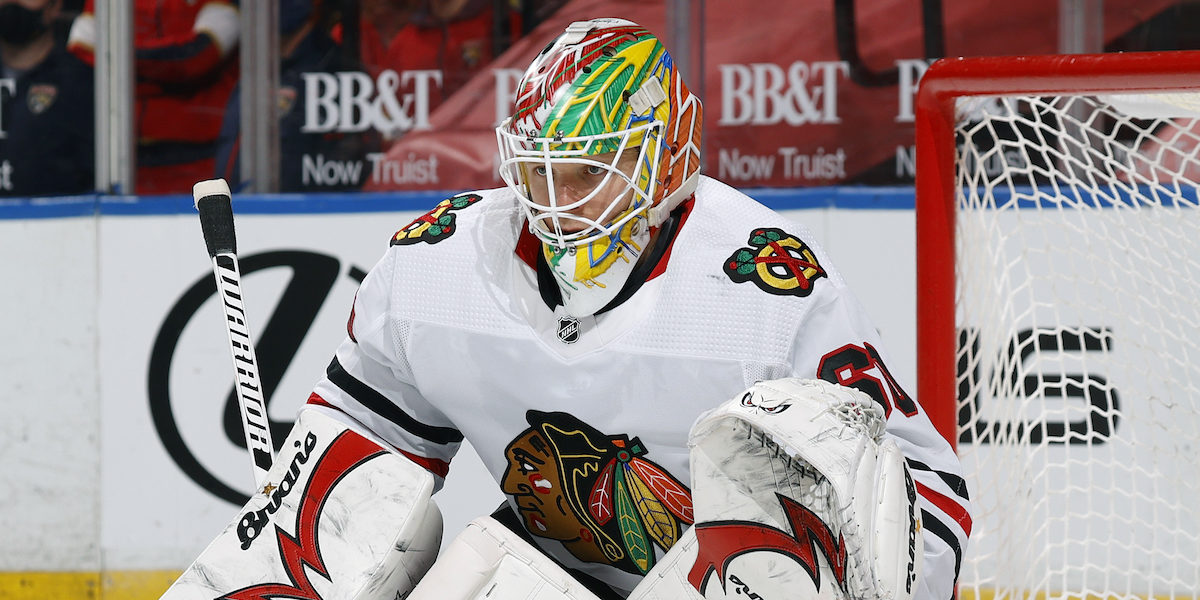 On Tuesday evening, the losing streak rolled on after the Blackhawks lost to the Los Angeles Kings at the United Center. The Blackhawks have now lost eight in a row and haven’t won in over a month at home.

•   The Los Angeles Kings came into last night’s game in desperation mode, playing for their playoff livelihood against a team riding a seven-game losing streak with nothing to play for, and it showed all night. The Kings outshot the Blackhawks 14-6 in the first period and potted a pair of goals on their way to a 2-0 lead after one period in Chicago. Los Angeles would outshoot the Blackhawks 36-20 in a 5-2 victory.

•   The Kings players were seen after the game huddled around a TV outside of the visitor’s dressing room at the United Center, watching the remainder of the Knights-Canucks game with their playoff hopes very much in the air even after the 5-2 win over the Hawks. Blake Lizotte scored a pair of goals, and Trevor Moor, Phillip Danault, and Jordan Spence added goals for the Kings on Tuesday night.

After tonight's game, several Kings huddled around a TV outside their locker room, watching the Knights-Canucks game.

That adrenaline from a tight playoff race is something the Blackhawks only wish they could feel right now.

•   Meanwhile, the sentiment in the Blackhawks locker room couldn’t be any more different. Here’s what Derek King had to say after the loss: “It’s physical, but I think mentally we’re gassed,” Chicago coach Derek King said. “Then you add on a losing streak, we can’t get out of it, and the teams we’re playing that are coming in here. It’s not going to get any easier because these guys are looking for points, too. There are some desperate teams out there that want to get into the playoffs. It’s going to take a lot of hard work, pretty solid effort, and almost a perfect game for us. We have some young guys in the lineup, which is great. It’s given them an opportunity to see where they’re at, but you can see the mistakes at times.”

•   Taylor Raddysh scored a goal and recorded an assist in the losing effort.

•   Raddysh looked like the best forward on the ice for the Blackhawks last night with a goal, an assist, three shots on net, and eight hits, but Raddysh said after the game that everything is about the team right now: “Everything is all about the team,” Raddysh said. “I’ve had bad games. I’ve had good games. We’re all in it together, and right now, it’s kind of frustrating the way the games have been going. But I feel like we have to keep going day by day and keep getting better and better together.”

•   Philipp Kurashev logged the primary assist on the Raddysh goal with his nifty pass to set up the one-timer for Raddysh. Kurashev and Raddysh teamed up for a beautiful sequence to set up Patrick Kane for a third-period goal. Kurashev tangled up with Phillip Danault to prevent him from getting a stick on Patrick Kane while kicking the puck to Taylor Raddysh, who delivered a perfect feed for the Kane tap-in.

Patrick Kane follows up and buries the nifty setup from Kurashev and Raddysh to bring Chicago back within 2!#Blackhawks pic.twitter.com/Ok8c1IrkjB

•   Collin Delia allowed four goals in the losing effort and fell to 1-2-0 with 12 goals allowed in his four appearances (three starts) since being recalled last month. The Blackhawks are in a major funk, but we have to stay focused on the important things, the development of players who have a chance to stick around. Last night, two of those players, Philipp Kurashev and Taylor Raddysh, had very nice games. Alec Regula, who was recalled from Rockford on Tuesday morning, also had a nice showing against the Kings with two shots on goal, a hit, and a block.

•   The Rockford IceHogs announced this morning that they reached an agreement with Captain Garrett Mitchell on an extension for the 2022-23 season:

We have signed Captain @Mitchy1_0 to an extension for the 2022-23 season! #OhCaptainMyCaptainhttps://t.co/rJ12wmgTqH pic.twitter.com/ozFrqmOZCW

•   The IceHogs also announced some schedule changes this morning. According to the AHL, Rockford’s games with the Manitoba Moose this weekend have been shifted from Friday/Saturday to Saturday/Sunday to impending inclement weather.

#ICYMI, our games this weekend at @ManitobaMoose have shifted from Fri/Sat to Sat/Sun.

•   The Blackhawks reported attendance last night was 18,032, but it looked much more sparse in the United Center early on. Maybe it was the nice weather. Maybe it was the White Sox home opener. Or, perhaps the losing streak is wearing on fan enthusiasm. Either way, the turnout wasn’t great.

•   Some clarification/analysis on the Blackhawks’ defensive struggles of late courtesy of Ben Pope:

The Blackhawks' defensive coverage has been shoddy recently.

That's partially because the Hawks' D have been chasing their marks too high, like they did under Colliton, rather than switching off to forwards, like King wants them to do.

•   Derek King gave the Blackhawks the day off today, so we’ll know what Thursday night’s lineup will look like at tomorrow’s morning skate.

•   The Bulls playoff schedule is set! Adjust your calendars accordingly:

The Chicago Bulls’ Round 1 Playoff Schedule is Officially Outhttps://t.co/Ml2Fetty6x pic.twitter.com/9VwgpdalEq

•   How can you not love baseball?

I Dare You Not to Cry: Brett Phillips Hit a Very Special Home Runhttps://t.co/stKQ5RdUQE pic.twitter.com/Oup1zqFY68