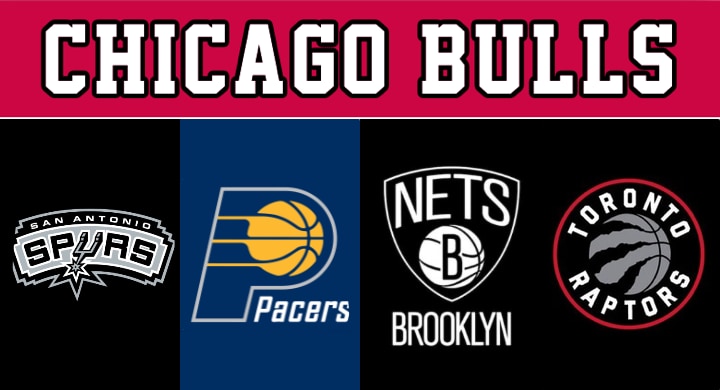 Back and forth week.

Additional Roster Notes: Ryan Arcidiacono, Tomas Satoransky, and Chandler Hutchison are all listed as day-to-day with minor injuries. All three are probable for tonight’s game. Lauri Markkanen is the newest player to join the Bulls list of long-term injuries. An MRI showed an early stress reaction in Markkanen’s pelvis, and the Bulls will sideline him for 4-6 weeks. Meanwhile, Otto Porter appears to be doing some new mobility exercises.

Otto Porter Jr. is walking laps around court, including some backwards skipping, as Bulls shootaround ends.

Bulls: Next man up must be said a lot in the Bulls locker room. With Lauri Markkanen on the bench for the weeks to come, Thaddeus Young will play a vital role for the team moving forward. However, the Bulls path toward any success during this upcoming stretch might rest more on the shoulders of a player like Tomas Satoransky. The Bulls’ biggest problem all season has been on the offensive end. While Markkanen was having a down year, he was still viewed as one of the team’s more dependable offensive weapons. Satoransky showed last game that if he’s aggressive enough, he can help fill at least some of the holes (19 points, 6 assists, and 6 rebounds against the Cavaliers). Earlier this season he had a career-long stretch with six games in double figures, and if the Bulls want to stay competitive, he’ll have to tap into that potential once again.

Spurs: With no LaMarcus Aldridge on the court, this Bulls’ attention should turn directly toward DeMar DeRozan. The Spurs’ most versatile scorer, DeRozan can impact the game across the court. He’s cooled down over the last five games or so, but before that, he reminded everyone of his All-Star status with a 10-game stretch where he averaged 28 points per game. Kris Dunn may be able to help slow him down, but if DeRozan gets in a rhythm, the Bulls could have a hard time keeping up.

Pacers: As it stands, the Bulls will be the first team to see Victor Oladipo this season. While it’s likely he’ll be on a minutes restriction of some kind, Oladipo is just another weapon for this Pacers team to attack the Bulls with. Chicago has struggled in both matchups against this unit’s frontcourt, and the more attention they pay to slow down the Pacers’ bigs, the more of an opportunity Oladipo will have to carve-up the Bulls defense. It’s hard to envision the first game back for a guy who hasn’t played in over a year to be a big one, but knowing Bulls basketball, they’ll likely find a way to make it happen.

Nets: Look out for a Spencer Dinwiddie revenge game! The last time these two teams met, Dinwiddie dropped 24 points to help the Nets grab a six-point victory. The return of Kyrie Irving has expectedly caused Dinwiddie’s numbers to take a hit, but the point guard is still very capable of successfully managing a game. He’s come up in the clutch for the Nets before, and with Kris Dunn trying to lockdown Kyrie Irving, Dinwiddie should have an opportunity to exploit his weaker matchup. With how the Nets have been playing, it feels like the Bulls can win this game. But if Dinwiddie steps up, the Nets will likely be too much to handle.

Raptors: With Luke Kornet and Cristiano Felicio still holding down the fort underneath the basket, Marc Gasol could be a real difference-maker. The veteran center has been key in helping the Raptors win seven-straight games. He may not be the most reliable scorer or even the most aggressive rebounder, but his experience should be more than enough to control the paint all night long.