With His *FIFTH* 40-Point Performance of the Season, Zach LaVine Continues To Prove His Worth Skip to content 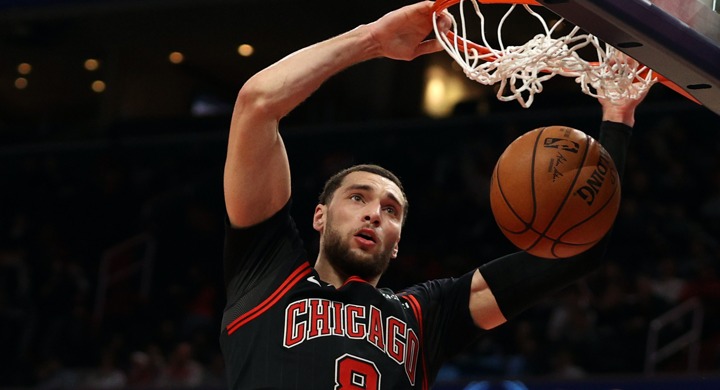 He’s good, but he’s not a winning player!

Over his first six years as a professional, Bulls guard Zach LaVine has become one of the more polarizing talents in the NBA – indeed, playing for not one, but two down-on-their-luck franchises hasn’t been the best for the 24-year-old’s image. I mean, the guy has been in the league since he was 19-years-old and has yet to make a single playoff or All-Star appearance. That’s rough. And unfortunately, when that’s the case, it’s hard not to put at least some of the blame on him, specifically, especially when he’s taken it upon himself to be an offensive leader.

Still, LaVine might very well be a victim of circumstance, or at least that’s what he’s been trying to prove to people this season. All year long, LaVine has found himself at the top of the NBA’s offensive leaderboards, averaging the 13th-most points per game, while also being the only guy to have not missed a game this season AND average 25+ points per contest. He also happens to rank 7th in 3-point field goals made, though admittedly he has taken the third-most overall attempts (hey, you miss 100 percent of the shots you don’t take, right?).

On the defensive end of the court, LaVine still has plenty of room for improvement. Although, I think it’s fair to say he’s taken steps in the right direction this season. He’ll never establish himself as an above-average two-way player, but half the battle on defense is effort, and (to be blunt) I think we’ve pretty clearly seen him give some more craps this season than the past.

When the All-Star selections came through and LaVine didn’t make the cut, it was fair to wonder if his impressive performances would come to an end. However, LaVine has maintained his sense of urgency, and the goal to keep improving his NBA reputation was on full display last night.

But LaVine is not alone. Bradley Beal also missed the All-Star mark this season, despite averaging nearly 28 points per game and having earned a nod the past two years. Indeed, the two are both in similar situations with their respective franchises – the only key difference: Beal has been the recipient of league-wide recognition in the past. For LaVine, then, you have to imagine a matchup between the two feels like a great opportunity to prove his worth, and his 41-point performance did just that.

Beal finished the game with 30-points, but if it wasn’t for his Wizards squad helping him get out to a 21-point advantage, there’s a good chance LaVine would have not only won the matchup, but also the game. In the 4th quarter, LaVine scored 19 points and sank multiple 3-pointers right over Beal’s noggin.

LaVine has now outscored Beal in all three of their matchups this season. And while some might say Beal helps his team by doing more in other areas, LaVine has kept up:

The first game between these two was neck and neck, but otherwise, LaVine has Beal beat.

On the season, LaVine now has a career-high five 40+ point performances and is tied for having the third-most 40+ outings (8) in franchise history. Add the fact that he hit eight threes again (he’s now the first Bulls player ever to have three games with 8+ made 3’s in one season), and he basically makes up an entire category in the Bulls history books …

Oh, he’s also had more explosive scoring games than many of the league’s best:

Zach LaVine with his 5th 40-point game this season. More than the following 2020 All-Stars and 2020 Team USA Finalists:

LaVine may not be the best all-around player on the court, but he definitely is one of the most gifted scorers in the NBA. The takeaway from this post isn’t to say he 100 percent should have been an All-Star or he is wayyyy better than Bradley Beal. Instead, it’s that LaVine deserves to be a part of the conversation from here on out. Heck, if players like Trae Young and Devin Booker can get league-respect on losing teams, why not LaVine?

Sure, LaVine might be a “good stats, bad team” player. He also might not be. Throughout his entire career, he’s been stuck on bad teams, but even in the midst of all that dysfunction and a torn ACL, LaVine has been able to turn himself into one of the league’s most dynamic scoring threats.

He will look to prove all of that and more this Saturday when he tries to become the first NBA player ever to win a dunk contest and 3-point shootout trophy.