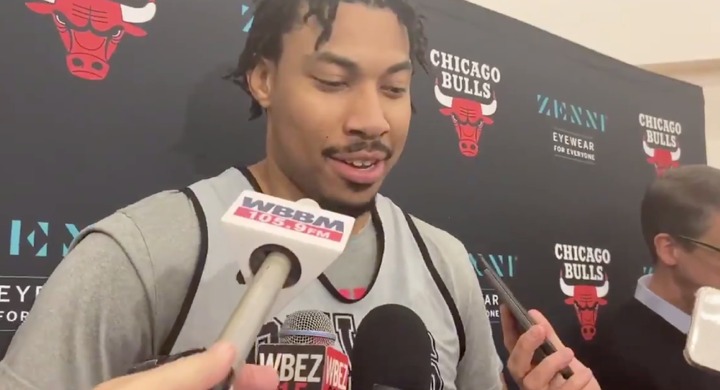 Enjoy this last day of freedom.

The Chicago Bulls start playing basketball again tomorrow, and the shackles of sadness are ready to lock you up.

Very interested to see what happens with his player option this summer. $28M is a lot of money but he may want long term security with his injury history.

Will he sit out and pick up the PO? Or try to earn himself something longer in the ~25 games? https://t.co/29dLcPyozQ

Otto Porter Jr. says he feels good but continues to take it day-by-day with his foot injury and won’t play until he feels 100 percent. @WGNNews #Bulls pic.twitter.com/24eDbCsfCh

John Beilein was an NBA head coach for 54 games.

Jim Boylen has been an NBA head coach for 113 games.

The Bulls' rumored front office plan isn't good enough. GarPax must be fired. It's on Michael Reinsdorf to make it happen:https://t.co/CLB6g4PBgh

P.S. The first 5 questions are about the front office. Other subjects welcomed.

We mic'd up Jim Boylen, Coby White and Tomas Satoransky

Sunday at 9 PM, you get to hear it. Watch Wire to Wire on @NBCSChicago or streaming on the MyTeams app: https://t.co/arLFeIQAI3 pic.twitter.com/Kda5HCGUgW

JUST IN: The NBA achieved its best-ever in-arena merchandise sales during NBA All-Star 2020 at the United Center in Chicago this past weekend, breaking the record previously set during All-Star 2010 in Dallas. pic.twitter.com/rYOoCu2w2s

I spent an afternoon with Patrick Beverley during #NBAAllStar Weekend. Here’s what he had to say about the city that shaped his game.

“I want to be remembered as a kid that came from Chicago…the real Chicago son.”