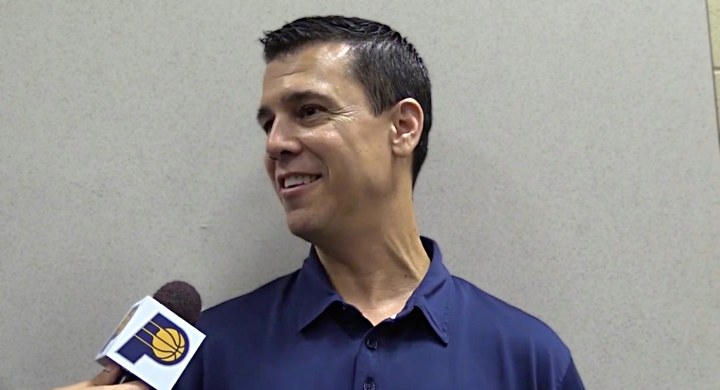 Let me start this post off by making one point very clear – it’s early.

All signs point to at least something happening this offseason, but the magnitude and – more importantly – the specifics are all still hazy.

With that said, the process did at least take some kind of step toward legitimacy yesterday, when a report surfaced of the franchise’s potential interest in current Pacers General Manager Chad Buchanan. I know it’s just one name, but it’s a name nonetheless. The more candidates that begin to surface the more believable it is that Michael Reinsdorfs has actually invested time in finding a new front office face.

Considering we’re still in the early stages, I don’t want to put too much weight on the first name. After all, we have no clue if Buchanan has or even would express interest. Still, it’s worth taking a bit of a deeper look into what makes Buchanan an interesting candidate. If he was the first name leaked to reporters – there has to be a reason.

The main commonality we’ve already seen from Buchanan is the massive respect he’s received from his players. While he may work more behind the scenes in the Pacers organization, make no mistake, he seems to be quite the people person. In Alex Kennedy’s piece on the inner-workings of the Indiana franchise, All-Star Victor Oladipo had quite the high-remarks about the GM that traded for him during his very first day on the job:

“I haven’t played on many teams, but based on the teams I have played on, it’s pretty rare for upper-management to take the players’ input and opinions to heart and really try to apply those things throughout the entire program. For them to do that, it just shows what kind of people they are and it shows what kind of organization we’re trying to build.”

Sure, Oladipo isn’t going to bad-mouth his General Manager, but he also didn’t have to say this. I mean, simply look at the comments Zach LaVine has made when asked about the personnel in his front office – “I’ve got to put the team first, but it’s just the situation we’re in right now.”

LaVine isn’t explicitly speaking against his management, but he also isn’t going out of his way to show support. Overall, he’s avoiding saying anything.

I think we can take a good chunk away from Oladipo’s comment, especially when you consider he’s been with three organizations already in his young NBA career. And Buchanan speaks to this player-connection directly in Kennedy’s piece as well, clearly labeling it as a key part of his front office management.

“Looking back, I think the most important thing that we did as a front office was get our players’ input. We asked Darren Collison, ‘What do you want from a front office?’ At the time, Boston had just traded Isaiah Thomas after he had played in the playoffs right after his sister died. Darren said, ‘Do you want the honest truth? Players in our league don’t trust front offices, for the most part. You guys can just trade us – regardless of how loyal we are to the team.’”

To be fair, I’m not sure how much direct communication John Paxson and Gar Forman have with their players, but I highly doubt it’s on this level. For example, if there were truly an open-dialogue, would Paxson have to contact Markkanen and his agent after those rumors of him wanting out surfaced (which were debunked by several sources by the way)? Personally, that feels like something a well-equipped front office shouldn’t even have to entertain.

Former-Pacer and current Bull Thaddeus Young also offered-up his opinion on Buchanan to NBC Sports Chicago, and he has nothing but encouraging comments.

I think it’s very telling that NBC Sports Chicago list that response as the answer to the simple question “what’s Chad like?” On his own, Young immediately mentions Buchanan’s ability to connect with the players. For someone who has played 13 years in the NBA with five different organizations, that kind of praise is meaningful.

Moving forward, I’m not sure how much Buchanan’s name will come up in conversation. However, at the moment, it’s all we got to in the “potential candidate” department. With the league continuously moving toward player empowerment, a front office presence that works directly with his players is a necessary addition. Perhaps Buchanan can be that guy.