So it Looks Like the Chris Paul Sweepstakes Are Up and Running, But Don't Get Any Ideas About the Bulls Skip to content 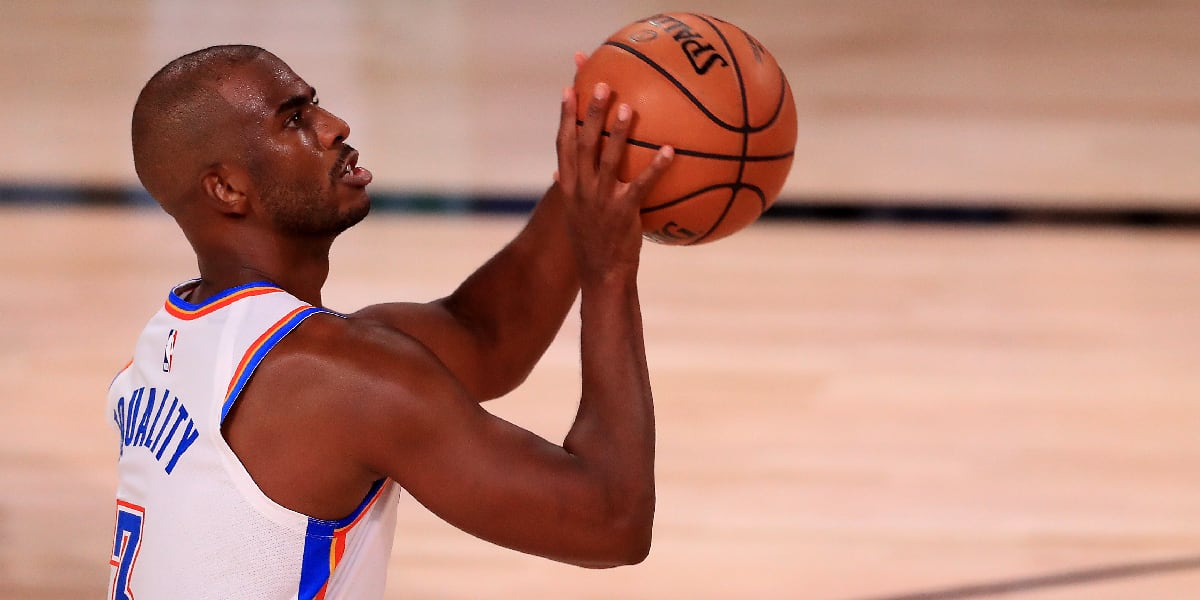 May I interest you in today’s special? It’s a beautifully aged point guard packed with a high basketball IQ and just a splash of injury trouble. It pairs well with younger, raw talent, but can work just as blissfully alongside a more meaty and robust superstar. You may be alarmed by the price; however, we can almost guarantee you’re getting what you paid for. – Oklahoma City Thunder General Manager Sam Presti on Chris Paul … probably

After a successful and unexpected season from the Oklahoma City Thunder, all signs point toward a massive rebuild. The organization is already jam-packed with draft picks after trading away both Russell Westbrook and Paul George last offseason. While the team was able to grab the No. 5 seed in the Western Conference this season, that was in large part thanks to the outstanding play of Chris Paul, who is expected to be sent elsewhere to grab even more assets for the Thunder rebuild.

Paul likely always knew that his stint in Oklahoma City would be short-lived. The roster isn’t strong enough to put him in a position to contend for a championship, and at the age of 35, the future hall-of-famer doesn’t have much time left to grab his first ring. With that being the case, it seems like numerous teams are already sniffing around Paul’s camp, which should make for quite an interesting storyline to follow over the next couple of months.

I have to imagine this is all very surface-level interest by most of these teams. However, even if that’s true, this still demonstrates a wide range of interest in Paul’s services. And while a contending team would make the most sense for Paul, Robinson is reporting that a franchise in the opposite situation is expressing the strongest interest.

Pardon me while I laugh my ass off [proceeds to laugh ass off].

The Knicks have always thrown themselves into the mix for big-name talent in the trade market and free agency, but I think we all know how often that works out (which is just about as often as it does for the Bulls *sad face emoji*). While the Knicks could trade several picks alongside Frank Ntilikina and Kevin Knox for Paul, I can’t see this offer being the best on the table. Not to mention, why would the Knicks want this? I mean, I guess this helps them compete for a playoff seed in the short-term, but this wouldn’t answer many long-term questions – that is unless they have some kind of picture-perfect plan to become an instant competitor. The 2021 free agency is stacked, and I suppose Paul on the roster could help lure someone to the team. Yet again, though, the guy is 35 years old – his window is closing fast.

I don’t see any variation of this trade happening, but weirder things have occurred in the NBA world. Speaking of which, it’s my job to throw the Bulls into this crazy conversation. While there has been no reported linkage between the two parties (which makes perfect sense), the Bulls do have Paul’s previous head coach now at the helm of their team. The two obviously worked well together last season, and who’s to say they wouldn’t want to keep a good thing going? Arturas Karnisovas and Marc Eversley have also made it very clear recently that this front office overhaul does not insinuate another rebuild. The Bulls will look to be more competitive as soon as next season, and the addition of a veteran presence like Paul to this young roster could push them in the right direction fast. Oh, let’s also not forget that Paul and Coby White have a super-close bond.

Ok, now that I got all of that nonsense out of the way, let me be clear – Paul will not and should not be on the Bulls next season (I think). The Bulls name will continue to remain sidelined in the conversations as the new front office tries to piece together a more long-term plan that focuses on maintained success. A trade for Paul would greatly restrict the team’s flexibility moving forward, which is arguably the best thing the Bulls have going for them right now. Anyway, to cut to the chase, no … just no.

Bulls interest aside, I’m very curious to see where Paul ends up. The guy has been a great player for a long time, and I hope he can land on a team with a real shot to win it all.