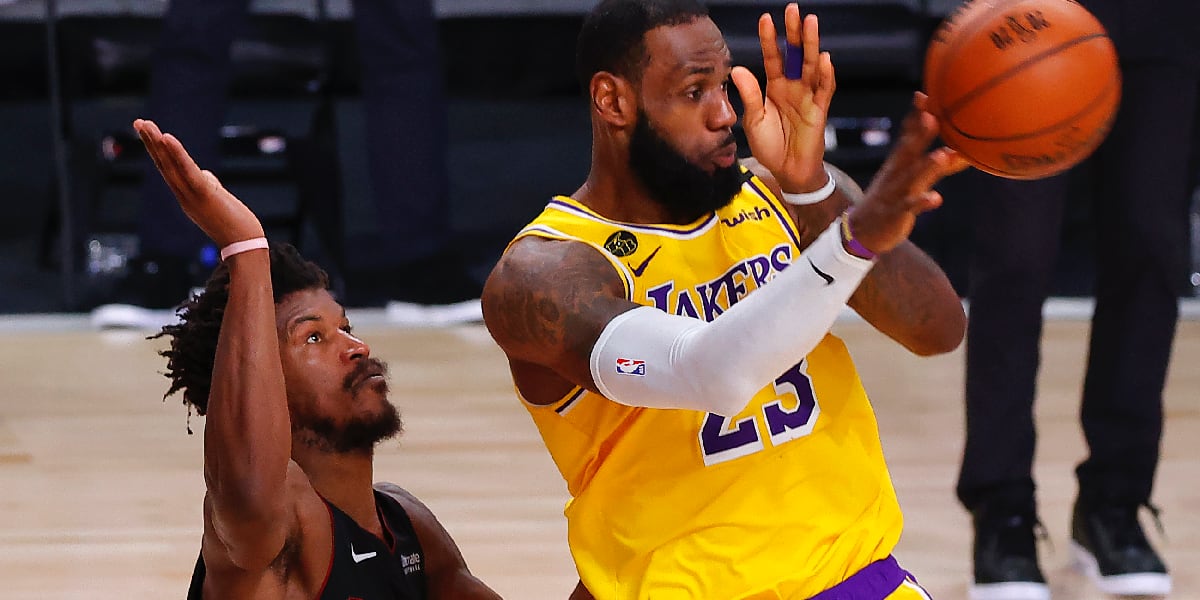 Soooo does anyone else feel hungover from watching Game 5 last night? That was insane.

•   In last night’s Game 5 victory for the Miami Heat, James had an opportunity to score the go-ahead bucket with 10 seconds remaining. Driving toward to basket with Jimmy Butler, Duncan Robinson, and Bam Adebayo all on his tale, the Lakers superstar decided to pass back to a wide-open Danny Green at the top of the key. A player known for his big-shot making in the NBA Finals, Green shanked the attempt off the front of the rim. The Lakers did end up grabbing the offensive rebound, but Markieff Morris threw the ball straight out of bounds once he tried to toss it into Anthony Davis, who was stationed underneath the basket. After this disgusting final possession, some folks on the interweb started to pound their fists at the Lakers. The most common point made was that James should have taken the Lakers last shot. I get it. Ideally, in that situation, you want the fate of the game in your best player’s hands. With that said, it basically was. James was triple-teamed and made the smart play by passing out to a solid 3-point shooter who was on an island. We’re talking … WIDE OPEN!

I slept on it, and I feel bad for Danny Green.

He makes the shot he’s a Robert Horry, a Derek Fisher, a Steve Kerr…

… and yet today he wakes up more of a J.R. Smith pic.twitter.com/kEd4HphmTg

•   James decision was fine. The right plays wins a game more than the forced play. Michael Jordan passed to Steve Kerr to win the 1997 NBA Finals. Jordan also passed to Scottie Pippen … who passed to Horace Grant … who passed to John Paxson to win the 1993 NBA Finals. At the end of the day, basketball is a team game, and everyone has to be at the peak of their powers to put on a ring. If we want to yell at James about something, it should be that he didn’t scare the sh*t out of his teammates enough to ensure they hit a last-second shot (I’m kidding … kind of). We both know that when Kerr and Paxson got their opportunity, they understood it was out of the question to miss the shot. Clank it off the rim and Jordan would emotionally tear you apart in practice before stealing all your money in a Dunkin’ Donuts racing bet.

•   Yet again, Jimmy Butler looked like a freakin’ superstar last night. The guy played a game-high 47 minutes (Thibs must have prepared him well for this) and finished with 35 points, 12 assists, and 11 rebounds – his second 30+ point triple-double of the NBA Finals. The last several possessions for the Heat were all Butler. He went bucket-to-bucket with James and forced his way to the line twice in the final minute, which is where he went a perfect 12-12 on the night. Butler has been the MVP of the Finals thus far. Obviously, he will not claim the award if Miami does not pull off this comeback, but the way he’s carried the team has been special to watch. Even if the Lakers still walk away victorious, I have a feeling we will not soon forget the incredible play from Butler in this series.

Jimmy Butler has been the most valuable player through the first five games of the Finals.

Leading all players in minutes, assists, and steals per game, and by a wide margin in each category. Second in points and blocks per game. Third in rebounds per game. pic.twitter.com/B6nI7pAL42

•   I’m trying my best to stay level-headed as Butler continues to put his name in the NBA history books. I stand by everything I’ve said in the past about why it’s not worth pouting about the Butler-Chicago screw-up. However, I’d also be lying if I said I don’t find myself asking “what if” every single game he has on this big stage. I know GarPax wouldn’t have built around him correctly, and I know that trade needed to happen to eventually get the fresh start will long desired, but this man is just so good. Plus, as I wrote about the other day, he’s just the perfect Bulls player in so many ways.

Considering buying a Butler Bulls jersey bc why not

•   Listen to Mickey Johnson, please and thank you.

“This virus is no joke. I don’t want anybody to go through this experience… If it wasn’t for @RushMedical, I wouldn’t be here.”

Former Bull Mickey Johnson expresses his gratitude to the doctors, nurses and healthcare staff after his battle with COVID-19 earlier this year ❤️ pic.twitter.com/LYIn1ZzNpG

When it Comes to Offseason Trades, No Bulls Are Off the Tablehttps://t.co/n90Sar0VnQ