Games without a win: 0

The Chicago Bulls came to play on Easter Sunday, beating the East’s second-best team 115-107 for arguably their best win of the season. Against the Suns, the team became noticeably more aware of how to use Vucevic. Against the Jazz, the team flashed some promising signs on the defensive end with a much-need boost of physicality. Against the Nets, they brought everything together.

Chicago held Brooklyn to their third-fewest points since the beginning of March. They rotated well on the defensive end and committed just 11 personal fouls, which marked their lowest total of the season. The team also had their third-straight game with single-digit turnovers, and that’s the first time they’ve managed to pull that off all season.

Equally encouraging was the further development of the LaVine-Vucevic duo. There is no question this afternoon’s game is the most comfortable each player has looked since the deadline. The two read each other’s game well and combined for 47 points on 52.9 percent shooting with 7 assists and 16 rebounds.

“Zach & I can be a very dangerous two-man punch in this league.” -Vooch pic.twitter.com/YxgIXGqG3p

The whole thing was a team effort, though, and it was more than encouraging to see everyone contribute to such a clean and complete win. Yes, the Nets may have been missing James Harden and Kevin Durant (who has been out since Feb. 15th), but that doesn’t take away from the fact that this was an important victory. After all, the Nets were missing both players in their last game too, and they dominated the 4th-place Charlotte Hornets with a 111-89 win. Not to mention, Kyrie Irving is still one of the best guards in the league, and the Bulls defense held him to just a 12-27 performance from the field (special shoutout to TBJ for his ball pressure).

The Bulls now have to carry this momentum into a much easier stretch that beings this week. If the playoffs are the goal, then the push has to start now. Let’s get some more wins! 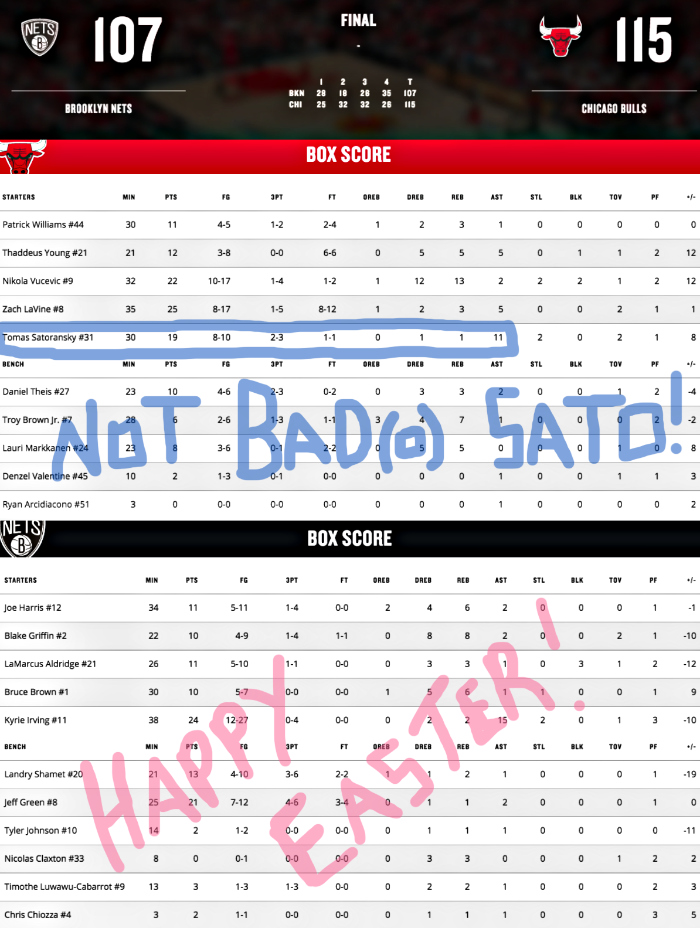