The new Bulls rule. That’s it. That’s the post.

Just kidding, I think I’ll get yelled at if I don’t include a little bit more. So, seriously, how about these new Bulls, huh!? Things may have taken a couple of games to click, but we’ve watched a completely revitalized team over these past three games. The squad has now won three straight for only the third time this season, and while the score fell below double digits in the fourth quarter, it was another truly dominant performance.

The team finished with 35 assists, tying their second-highest total of the season. They also shot a beautifully efficient 54 percent from the field, as they won the points in the paint battle for the sixth-consecutive game. Arguably the best thing, however, is that tonight’s game was another team victory. Seven of the Bulls nine players that took the court tonight scored in double-figures, and the bench played an incredibly valuable role. Markkanen, White, and Theis combined for 47 points(!), outscoring the Raptors short-handed bench by 27.

Again, things may have slipped off the tracks a bit toward the end, but I’m actually kind of glad they did. This allowed the Bulls to really emphasize their newfound ability to take care of business by steering things back in the right direction. Calls weren’t going their way and some easy buckets weren’t dropping, but they stuck to the game plan and made sure to snatch the W. Encouraging stuff.

I’ll share plenty of other thoughts tomorrow in bullets (I got a baking show to watch with the GF), so I’ll just leave you with this tweet:

What can Zach LaVine do when he finally gets some damn help?

But … ZaCh LaViNe iS jUst a sCoReR. 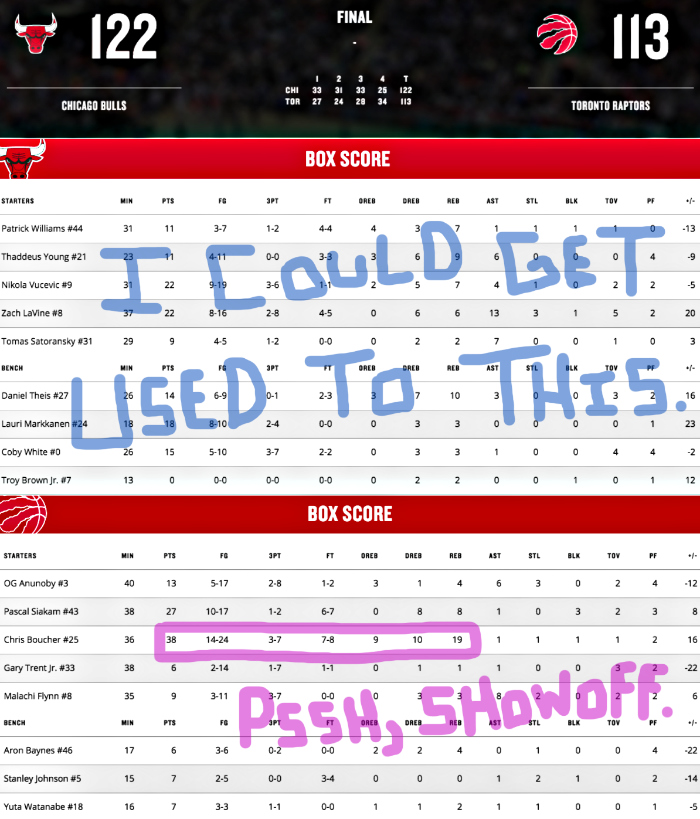