The Chicago Bulls had one job.

With the ability to clinch a 26.3 percent shot at a top-4 pick with a loss (the Bulls first-round pick sent to Orlando in the Vucevic trade was top-4 protected), the Bulls decided to beat the Milwaukee Bucks 118-112. Meanwhile, the New Orleans Pelicans and Sacramento Kings did their job tonight by losing their respective games, thus creating a three-way tie in the league standings. This means the Bulls saw their 26.3 percent advantage drop … but I’m not going to speak to how much right now.

To be brutally honest with you, this tiebreaker stuff for the lottery is confusing. I’ve seen some people say the Bulls will now split a 20.3 percent chance at a top-4 pick with those three teams, and I’ve seen others say that a random coin clip will differentiate who has the better odds. My previous knowledge tells me that there will be a coin flip, but I’ll give it a closer look and write a post about it early this week so we’re all on the same page.

Also, I just want to say that I’m not mad at the Bulls for winning this game. I’m never going to be mad at a team for walking away with a victory. Players come to play, and it’s their job to go on the court and give their best. Likewise, it’s not as if the Bucks made it easy on them. Since the Nets clinched the No. 2 seed right before tip-off, the Bucks pulled all their normal starters and road with an 8-man rotation of all bench/two-way players. They basically force-fed the Bulls the W.

Anyway, thank you folks for checking out the coverage this season. I wish things ended up differently, but we should have an entertaining offseason of change ahead. I look forward to talking it all out with y’all. More tomorrow. 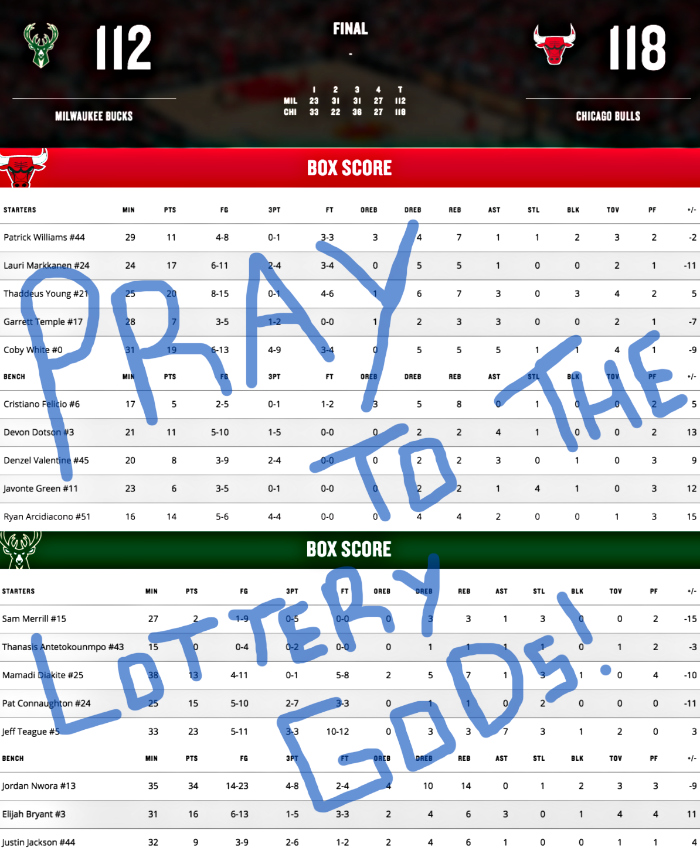