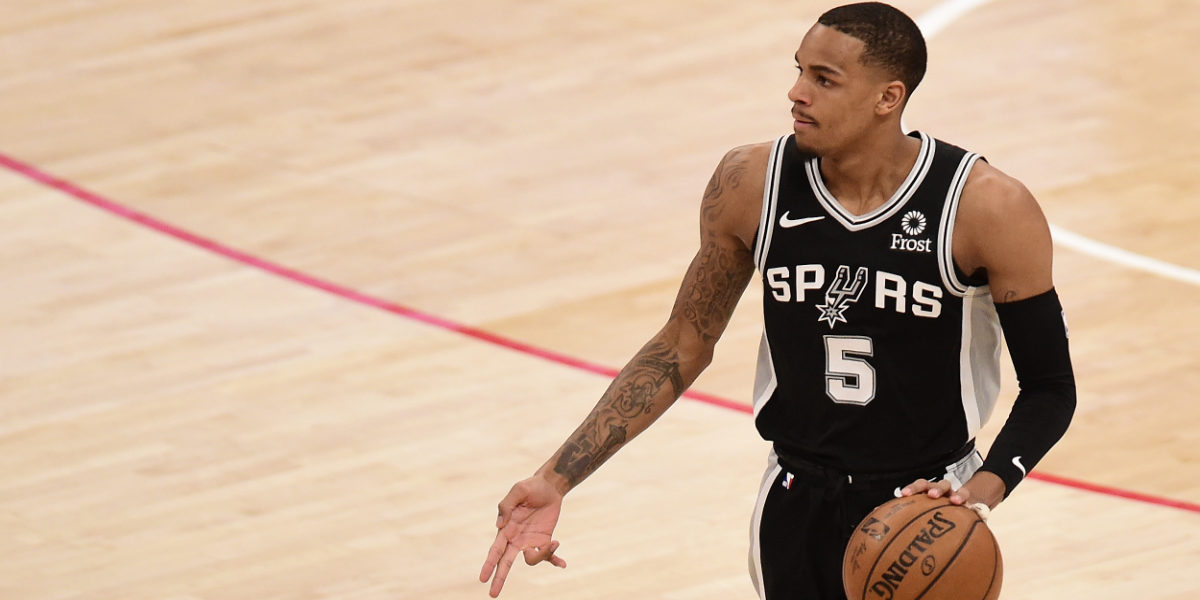 While NBA fans have their eyes locked on the Finals, 28 front offices likely could not care less. The NBA Draft is scheduled for July 29th, and four days later the free agency gates will open. In other words, the next few weeks will be very busy behind the scenes as organizations set course, and it’s just a fact that the busier things get upstairs … the more rumors tend to trickle down.

The Athletic gave the NBA world a new trade rumor to gnaw on Friday afternoon. According to Zach Harper, the San Antonio Spurs could opt for a fresh direction this offseason, which means they could be willing to move on from two of their top guards.

While it seems unlikely the Spurs would move their pick, keep an eye on them being active with the trade machine around the draft. The Spurs have to figure out where they want to be as a franchise and what their plan is moving forward. They’re kind of stuck in the middle right now. Murray and Derrick White could both be gettable, according to league sources.

Murray would easily be the biggest get of the two. The 24-year-old guard has gradually improved over his time in the NBA despite missing the entire 2018-19 season with an ACL tear. During the 2020-21 campaign, Murray averaged a career-high 15.7 points, 5.4 assists, 7.1 rebounds, and 1.5 steals per game. Considering his recent play, the willingness to trade him comes as a small surprise, especially when we consider the team signed him to a fresh four-year $64 million contract last offseason. But, again, Harper is reporting that the franchise is still trying to figure out what comes next. Perhaps they view Murray’s long-term security, as well as the reasonable nature of his contract, as a valuable asset that can help them either move up in the draft or pave a new path.

White does not bring nearly the upside Murray does, but he could be another interesting get for a team in need of a starting-caliber guard. Even though the majority of White’s recent work has come as a two-guard, he has plenty of experience taking over lead guard responsibilities. He started 55 of 67 games at the position during the 2018-19 season to help the Spurs clinch a 7-seed in the Western Conference. Over his seven playoff games that season, White averaged an impressive 15.1 points on 54.7 percent shooting from the field.

The 2020-21 season looked like it was going to be the best of his career, but a toe surgery and subsequent ankle injury ultimately held him to just 36 total games. White averaged 15.4 points (41.1 FG%, 34.6 3PT%) with 3.5 assists, 3.0 rebounds, and 1.0 blocks per game. Considering neither injury appears as if it should be anything too serious, there is good reason to believe White can produce at an even higher level in the coming seasons. However, already 27-years-old, he is currently locked into an even more expensive contract than Murray. White’s extension will kick in next season and pay him $73 million over the next four years. In the final year of his contract, White will make $18 million.

With the Chicago Bulls in desperate need of a point guard, it’s hard not to look at either Murray or White as a potential option. Both have proven reliable in recent seasons, and (while Murray’s is significantly higher) both have an intriguing upside that could fit well on this growing Bulls team. Murray, specifically, could be a very interesting fit next to Zach LaVine. At six-foot-four with a great six-foot-ten wingspan, he has been a strong perimeter defender throughout his NBA career. In fact, he was awarded All-Defensive Second Team honors in 2018, and a case could be made he deserved a spot on the ballot this season (5th in total steals this season).

Offensively, the Murray-LaVine combo would pack quite the mid-range punch. Murray shot 44 percent on his mid-range looks this season, including a 46 percent clip from the range beyond the free-throw line but inside the arc. He is also coming off a career-best season at the rim, shooting 61 percent on 228 attempts.

We probably also should note that LaVine and Murray are legitimately pals. Both were born and raised in the Seattle area, and the two are known to keep in touch. Would LaVine ask his boss to give Murray an extra special look this summer? Maybe.

If it’s 3-point shooting the Bulls want, however, White might be their guy. He knocked down 37.0 percent of his catch-and-shoot attempts from downtown this season, and his 38.0 percent mark from the 2019-20 season ranked in the 75th percentile, per Cleaning the Glass. Not to mention, he should also provide his own refreshing boost on the opposite end as a scrappy defender.

How much the Spurs would want in return likely depend on which direction they decide to go this offseason. Will they look for higher draft compensation to spark a more aggressive rebuild or will they look for more immediately impactful players to pair with what they hope to be a big free agency? San Antonio does have some of the most cap space in the league this summer, so the flexibility to makes moves is already there.

I do not necessarily see an easy path for the Bulls to snatch one of these two players away, but one does have to wonder whether or not a deal could be done via a Lauri Markkanen sign-and-trade. Rumors have already swirled the Spurs could be interested in making a run at Markkanen this offseason, so it could not hurt for Arturas Karnisovas to pick up the phone and see what else the franchise might like tied to Markkanen for either White or Murray!