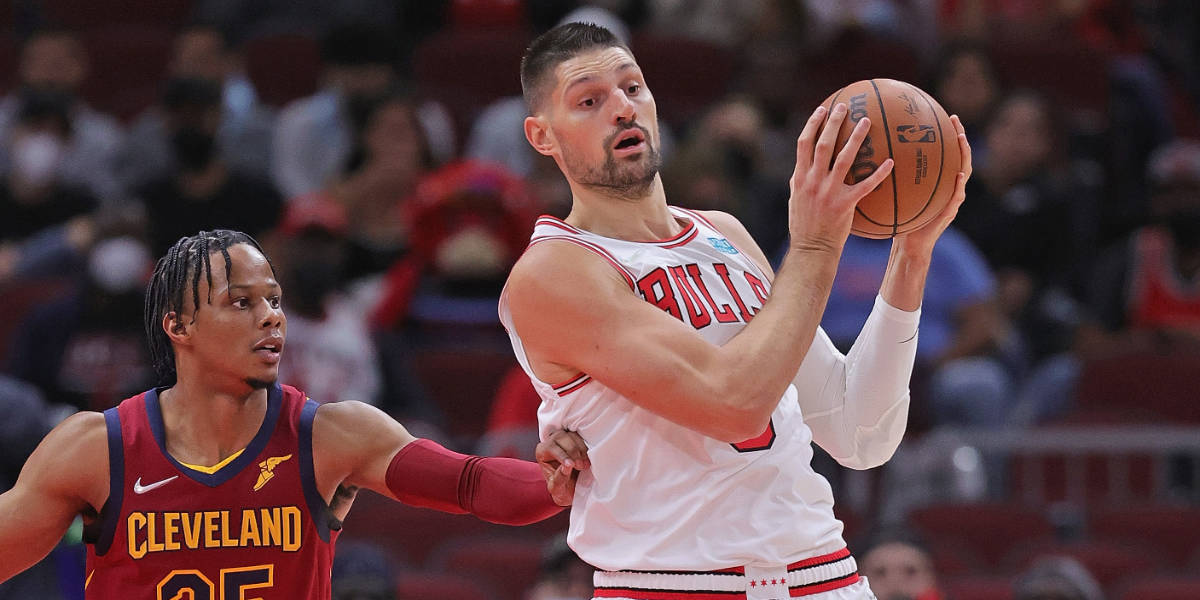 If the broadcast crew catches a glimpse of a man with a singular happy tear running down his cheek tonight … there is about a 94 percent chance that man is me.

Not only will it feel special to experience the United Center’s first normal regular-season crowd since March 10th, 2020, but there will be something particularly poignant about hearing PA announcer Tim Sinclair read off this starting lineup. For the first time in at least half a decade, the epicness of Sirius blasting in the background will feel like it matches the epicness of the names high-fiving on the court.

As I take my seat, the GarPax aroma will be replaced with the sweet smell of change, and I just can’t wait.

Also, if they play this video over the big screen, the nearest brick wall will not be safe.

Some thoughts before our Home Opener. pic.twitter.com/SLP0zWKoEx

•   My excitement might pale in comparison to that of Patrick Williams and all the Chicago Bulls’ newbies. The rookie has yet to experience an actual regular season home crowd at the United Center. And while guys like Lonzo Ball, DeMar DeRozan, Nikola Vucevic, and Alex Caruso have all gotten a glimpse of the Madhouse on Madison, I have to imagine wearing the *right* jersey will provoke a much more intense reaction.

•   Speaking of intense reactions, I almost freaked out (and not in a fun Le Freak kind of way) when speculation of Patrick Williams’ availability for tonight’s home-opener came across my desk. Head coach Billy Donovan said the Bulls’ second-year forward suffered a shoulder strain after a loose-ball situation on Wednesday. Fortunately, while we first thought he would be listed as questionable going into tonight, the 4:30 p.m. CT injury report on Thursday updated Williams’ status to probable.

Patrick Williams Is Dealing with a Shoulder Strain and Will “Likely Be Questionable” for Tomorrow’s Home-Openerhttps://t.co/aKrMkdmA1Q

•   All things considered, the Bulls could use Williams’ defensive chops tonight. While the Pelicans didn’t necessarily look like the most threatening offense in their 117-97 loss to the 76ers, Brandon Ingram can still look pretty darn dominant on any given night. Having Williams in the frontcourt to help contend Ingram’s length and shot-making could be key to the Bulls walking away with their second-consecutive win, especially since he will not have to waste any energy guarding the explosive Zion Williamson (out with a foot injury).

•   Joining Williamson on the injury report will be opening night starter, Josh Hart. The team has plenty of options to fill Hart’s place, but all are rather young and unproven commodities. With that being the case, I can’t help but wonder if we could see former Bull Garrett Temple or Tomas Satoransky sneak their way into the starting lineup. Revenge Game Mode could be activated.

•   While Ingram will draw the most attention, Jonas Valanciunas should be in second place. The big man can go hand-in-hand with Nikola Vucevic on the glass. In fact, offensively, Valanciunas was the second-best rebounder behind only Clint Capela last season. Vucevic won the first matchup these two had in the preseason pretty handily (won rebounding battle 10-4) while the Bulls cruised to a 121-85 victory. However, if we learned anything from the Bulls’ offensive performance in Game 1, it’s that the regular season can be a whole new ballgame. Vucevic will have to come ready to play with an aggressive, bully-ball mentality.

•   Also, let’s hope Vucevic can score the ball at a much higher clip than he did on Wednesday night. Chicago looks committed to getting him plenty of shots, but he will only make life that much harder on everyone if he shoots 7-21 as he did against Detroit. Fortunately, I liked most of the shots this offense was able to hand him (he missed 10 shots at the rim), so let’s hope the opener was nothing more than an off night.

•   Fun Fact: The ex-wife of Michael Jordan sold her home to DeMar DeRozan, according to the Chicago Tribune. It was expensive.

•     Last night, the Golden State Warriors and Los Angeles Clippers were in a slugfest until the final seconds. Both Paul George and Steph Curry were at the peak of their powers, and it all led to this incredible exchange with a little under two minutes left.

"I'm from the logo with it" pic.twitter.com/dCqc0Gilg6

•     Note to self: Never dare Steph Curry to shoot a shot from the logo with your team down one late in the 4th quarter. Eventually, I will be in that situation, and I will not make the same mistake!

•   Wow, gonna be brutal for the Warriors when the Bulls break their 11-game win streak.

The next 10 games for the 2-0 Warriors, who have a chance to start this season strong

•   Good or bad: When you talk about basketball history, the Bulls will show up.

The Heat destroyed the Bucks 137-95 last night. Only three defending champions in NBA history have lost a game by a larger margin:

•   I can’t wait for more Ben Simmons updates (this is a sarcastic bullet)!

Daryl Morey, in a Philadelphia radio interview, confirming what's been widely believed: He will not be pressured into trading Ben Simmons. "People should buckle in," Morey said. "This is going to go a long time."

•   I highly recommend the Blackhawks win a game.

The Bears Won't Know RB Damien Williams' Availability Until Saturday (At the Earliest)https://t.co/98b5bUCiug