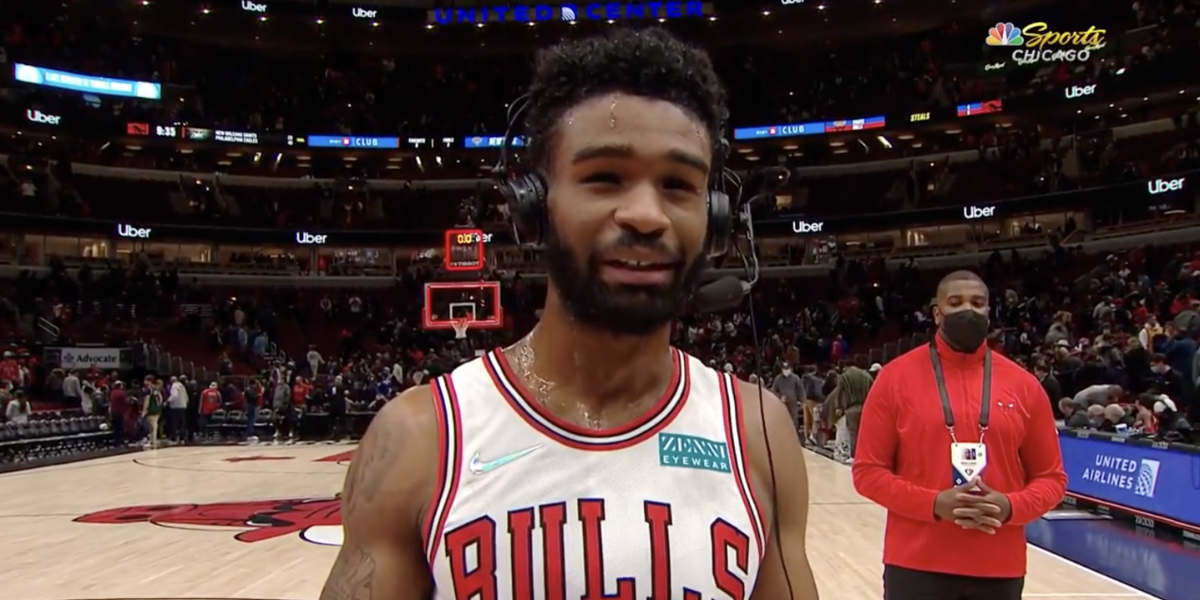 Coby White first made a name for himself in the NBA on November 12th, 2019. The Chicago Bulls No. 7-overall pick was clocking plenty of early-season minutes for a soon-to-be-self-destructive Bulls team, so much so that he was asked to play a vital role in crunch time just 11 games into his NBA career.

The Bulls were facing the New York Knicks on that mid-November day with the score tied 85-85 heading into the 4th quarter. Over the next 12 minutes, White would manage to single-handedly outscore the Knicks. How? By hitting an absurd SEVEN 3-pointers and scoring 23 points. Not only was this a Bulls franchise record for 3’s in a quarter, but White became the youngest player in NBA history at the time to hit seven shots from downtown in a game.

So when White’s first multi-bucket game back from a nearly six-month-long hiatus came against the Knicks on Sunday night, it felt poetic.

No, White didn’t set any records or light the basketball on fire, but he did score 10 of his 14 points in a closely-fought 4th quarter behind three huge shots from downtown. The first 3 White nailed marked the first bucket of the frame, reclaiming the lead for Chicago at 75-74. Three possessions later, White hit another. Two possessions after that, White hit his 3rd. It was the same kind of spark plug scoring we have seen from White time and again, as the Knicks went down 91-84 in the blink of an eye and could never regain the lead.

“I’m just personally happy for him,” head coach Billy Donovan said after the game. “I know people look at him the past couple of games and [go] ‘how far off is he? Where is he?’ But, for me, when you watch a guy work every single day the way he does, never points fingers, always tries to figure out what he can do better, as a coach you have a real appreciation for a professional like that. You want him to be able to come off this 6th-month recovery and be exactly where he was before he got hurt. It’s not realistic. I give him a lot of credit.”

Immediately upon White’s return, the third-year guard was hammered by some members of the Twitterverse for failing to execute. I continued to see the idea of sending him down to the G-League or benching him as he shot 1-11 over his first three games. To be quite frank, I thought this sounded crazy. While the G-League might help him regain some confidence, it wouldn’t help him gain an understanding of his new role, or a feel for his new teammates.

Sure, maybe he comes back a bit more eager to fire away, but the process of learning where he fits in among this new roster and system would have been delayed. And that’s the part that matters most this year.

Coby earns a Gatorade shower from Zach and DJJ 😁 pic.twitter.com/TaBMBS1hH2

More importantly, did people simply forget what White went through? A torn labrum is no joke, particularly for a player that relies so heavily on ballhandling and shot creation. I also can’t help but mention this was White’s first significant injury of his career. Combine that mental hurdle with the physical challenges and the fact that only two teammates remain on the roster from the start of last season (and one of those teammates is out indefinitely with a wrist injury), and I think White deserved more than four games to find his footing.

“Nothing happens overnight,” White told Bulls dot com. “I feel everyone in society nowadays, my first game back I was supposed to go out and do what I did tonight. It’s not reality. I haven’t played in six months, on a new team. I just had to trust my work, but also take my time. Nobody rushed me, the front office, the players, the coaching staff. They all just told me to be confident. They said things were going to fall into place. I knew all the work I put in, the uphill battle I was going through. I knew a game was coming.”

Patience is a virtue, and White reminded all of us of that last night.

I’m assuming this 4th-quarter performance will be more indicative of the White we see moving forward, but I’m also not going to be surprised if more bumps in the road surface. You shouldn’t either. Again, this whole thing is a process for White, and it takes more than a flip of the switch in one game to feel totally comfortable. The reintegration of big man Nikola Vucevic is an example of another learning curve, but I admit it’s reassuring to know these two have at least some solid chemistry from the end of last season.

Look, there is a time and place for panic and criticism. But we haven’t reached that point yet, and I have a tendency to believe we will not as the season goes on. Once White adjusts, this feels like a role and team built for his speedy scoring ability, and I can’t wait to see what he does in that role moving forward.