Bulls Health Slowly Improving, Looking on the Bright Side, NBA Highlights Galore and Other Bulls Bullets Skip to content 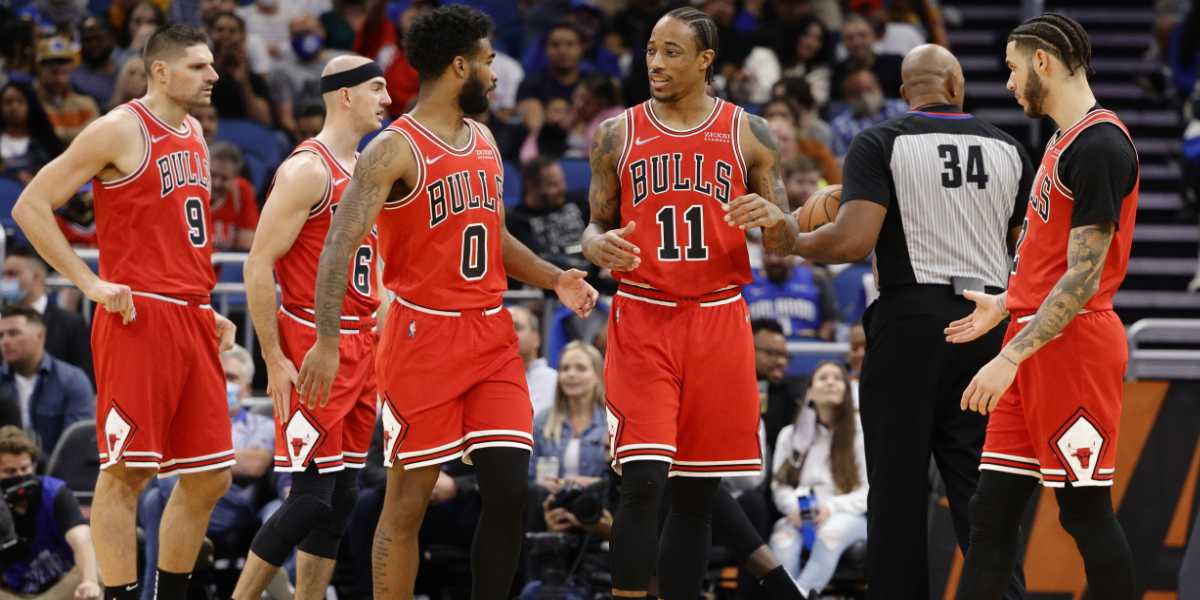 I’m a bad news first kind of a guy, so let’s start there.

Ah, Man: LaVine, Ayo, and Alize Won’t Be Back Until After Christmashttps://t.co/SKHbaYaJiu

Zach LaVine, Ayo Dosunmu, and Alize Johnson are not expected to return until after Christmas. This updated timeline means all three will at least miss matchups with the Lakers (Dec. 19th), Rockets (Dec. 20th), and Raptors (Dec. 22).

The good news is that the Bulls could have Coby White and Javonte Green back in the rotation by this weekend. Both players are officially out of the NBA’s Health and Safety Protocols and both have gotten in work at the Advocate Center. The question now is how soon will leading scorer DeMar DeRozan join them? He is currently considered day-to-day, according to NBC Sports Chicago’s Rob Schaefer, as he originally tested positive on December 6th.

With the Bulls’ next game still three days away, one can only hope DeRozan has enough time to get through all the proper screening and play on limited minutes against the Lakers.

•   With 10 players having to enter the NBA’s Health and Safety Protocols, I hesitate to use the word luck, but the Bulls have been fortunate to go through these issues in one of the more favorable stretches of their schedule. Here is what the slate looks like as the team tries to work their way back to full strength:

vs. Lakers
vs. Rockets
vs. Raptors
vs. Pacers
@ Hawks
vs. Hawks
@ Pacers

•   Five of the next seven games will be at the United Center, and six of those seven games will be against teams that currently sit .500 or worse. Of course, we know thanks to losses to the Rockets and Pacers already this season that none of these opponents can be taken lightly, but I think it’s fair to say there are much more grueling cards that can be dealt to such a depleted roster. If DeRozan can work his way back sooner than later and pick up where he left off, the core of him, Ball, Caruso, and Vucevic should be able to hold down the fort adequately while we anxiously await LaVine’s return.

•   Also, if we want some more potential bright spots, I guess we might as well point toward the rest this team has now gotten. Caruso was dealing with a lingering hamstring injury before the Bulls’ two games were postponed. The extra time off seems to have helped get him back to 100 percent. Meanwhile, we all know LaVine has played through a thumb injury since the end of October. He recently stopped playing with it wrapped up, suggesting the majority of the pain has subsided. But, still, some time on the couch might help him get rid of any and all discomfort.

Alex Caruso (lingering hamstring ailment) is "doing fine," Billy Donovan says. The COVID-19 pause will be helpful for him and he has recovered well, Donovan adds.

•   We also might as well consider that DeRozan and Vucevic are two players in their 30s playing major minutes. For a team with a good chance at a playoff run, this midseason break could help add some extra miles down the road. At the end of the day, for those players who have remained asymptomatic or negative, this hiatus could offer some rejuvenation. I do worry slightly about their conditioning immediately upon a return, but they should be well-rested enough to get back in peak shape.

•   This is kind of a “duh” headline, but it’s still important to hear it put into the universe. The Bulls have placed themselves in a real position to compete for home-court advantage come playoff time, and they seem like the perfect kind of team to try to improve around the margins this deadline.

•   Whether it be via trade or the buyout market, I would anticipate we hear the Bulls in a lot of fringe rumors over the next couple of months. With that in mind, don’t consider me shocked if Chicago becomes one of those third teams in a trade. There is a lot of big names who could eventually end up on the move, and I see Karnisovas as the type to sneak in for an extra pick or upgraded bench piece.

•   It’s only been five days since the Bulls have played but it’s felt like an entire offseason.

THE ENDING TO THE PELICANS-THUNDER GAME 😱

•   Alex Caruso could have done that if he wanted, but you guys didn’t want him.

That was a wild and fun one last night for the Hawks. https://t.co/qWJ9cqE4SB