Tonight was defined by one moment and one moment only: Mac McClung’s first NBA bucket.

Fine, I’m messing with you, but the rookie and viral sensation’s first career score did indirectly define the night the Chicago Bulls had. Indeed, without a dominant performance from start to finish, McClung would have never touched the hardwood.

After another closely fought first quarter between these two squads, the Bulls blew the doors of the Hawks in the 2nd frame. They walked into the locker room with a 73-53 lead thanks to an absurd 69.8 percent field goal percentage in the first half. Four players found themselves in double figures early, and this trend only continued over the next 24 minutes.

Chicago finished the night with all five starters scoring 14 or more points. Ayo Dosunmu and Tyler Cook joined the double-digit party off the bench, with the rookie adding a stellar 14 points and the two-way player scoring 1o points on a 5-6 showing from the field.

Dosunmu’s defense on Trae Young proved to be a game-changer yet again. Javonte Green was the one to start the night on the All-Star guard, but Dosunmu took over in stints, picking Young’s pocket and blocking him twice.

The Bulls’ “Big 3” carried the weight they needed to, but tonight was won by the role players. On top of Dosunmu’s pestering defense, we saw an energetic Javonte Green bring the house down with a thunderous dunk and fight his way the free-throw line for a 6-8 performance. His 14 points were a season-high, and he also added 2 steals and one block. Coby White also held onto his momentum from the second half on Monday night and turned it into his first double-double of the season, scoring 17 points and dishing 12 assists.

White has had his fair share of jaw-dropping scoring performances, but this may be a game that belongs in his early-career Mount Rushmore. Despite shooting 6-14 from the field, White looked to be in complete control on the offensive end. He displayed a level of awareness and passing we have never seen from him before, and he was truly a major reason why the Bulls were able to run away with this thing in the fashion they did.

Anyway, as the final buzzer sounded, the Bulls had themselves a season-high 38 assists and their third performance in four games with at least 130 points. Oh, and it also gave the franchise its first five-game win streak since 2017! With those fun facts to chew on … sleep tight! 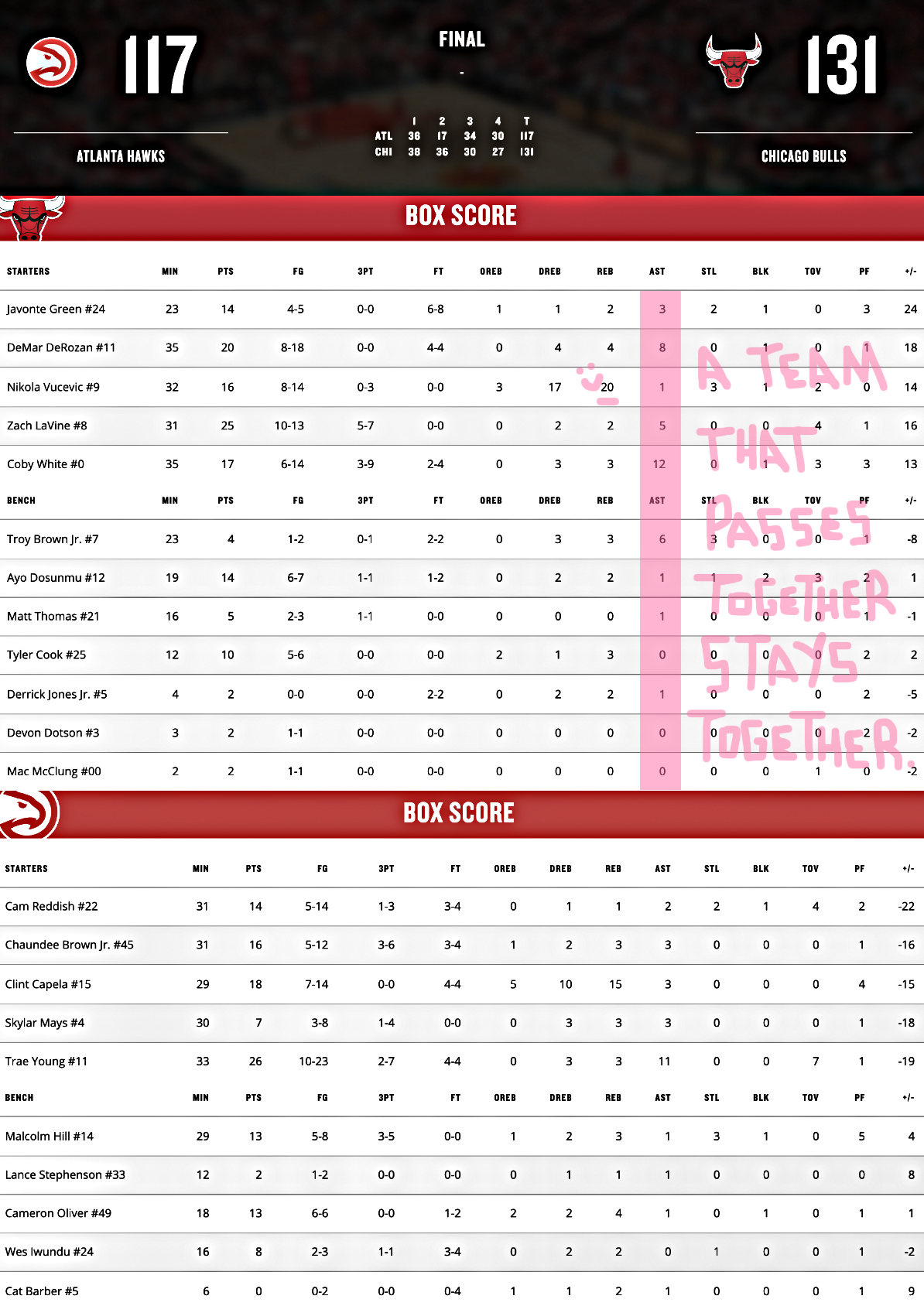