THAT’S HOW YOU SNAP A LOSING STREAK!

Despite playing one of the hottest squads in the NBA with a severe size advantage, the depleted Chicago Bulls handed an L to the Cleveland Cavaliers in an impressive fashion. And it all started with the MVP candidate.

After a pair of games where he shot just 38.0 percent from the field, DeMar DeRozan looked like the most ticked-off player on the court. The soon-to-be five-time All-Star completely took over in the second quarter, attacking Lauri Markkanen relentlessly in the halfcourt and making practically every player on the opposite side of the floor dance the jig. He sliced and diced his way to 18 first-half points, only continuing his dominance in the 2nd half to finish the night with 30 points on 14-24 shooting.

While DeRozan took the Cavs out to dance, Coby White blew them off. The way White has gotten downhill in the halfcourt this season has been remarkably encouraging. His timing on when to hit that second gear has been much improved, and it’s clear he’s reading the defense at a far more advanced level. If his 14 points in the first half (finished with 16) were a sign of his offensive development, then his season-high FOUR steals was another reminder that he continues to make tremendous strides on the defensive end. Speaking of which … AYO DOSUNMU IS THE REAL DARN DEAL.

The Bulls rookie looked anything but in another ridiculously well-rounded performance against one of the better young guards in the league. Every night it’s a different eye-popping story from Dosunmu and tonight it was about a clutch 9 points in the 4th quarter to help the Bulls stretch their lead into double-digits. His playmaking also shined, yet again, with 8 assists on just one turnover.

But despite all that tasty awesome sauce from DeRozan, White, and Dosunmu, my eyes kept turning back to the headband-wearing king. Alex Caruso may not have finished with the most flashy stat line, but it was evident from the opening tip that his return to the lineup meant something special to this team. His unwavering defensive energy helped the Bulls win the points off turnover battle 24-8. The team’s defensive rotations were the most crisp we’ve seen in weeks, as his on-court IQ made a recently sloppy Bulls team look anything but. Do you think it’s a coincidence he finished with a game-high +18? I sure don’t.

From start to finish, this was a big performance and an even bigger win. Some doubts crept in over this recent losing stretch – and rightfully so – but tonight reminded us what makes this Bulls team special and what a healthier team can do. More tomorrow! 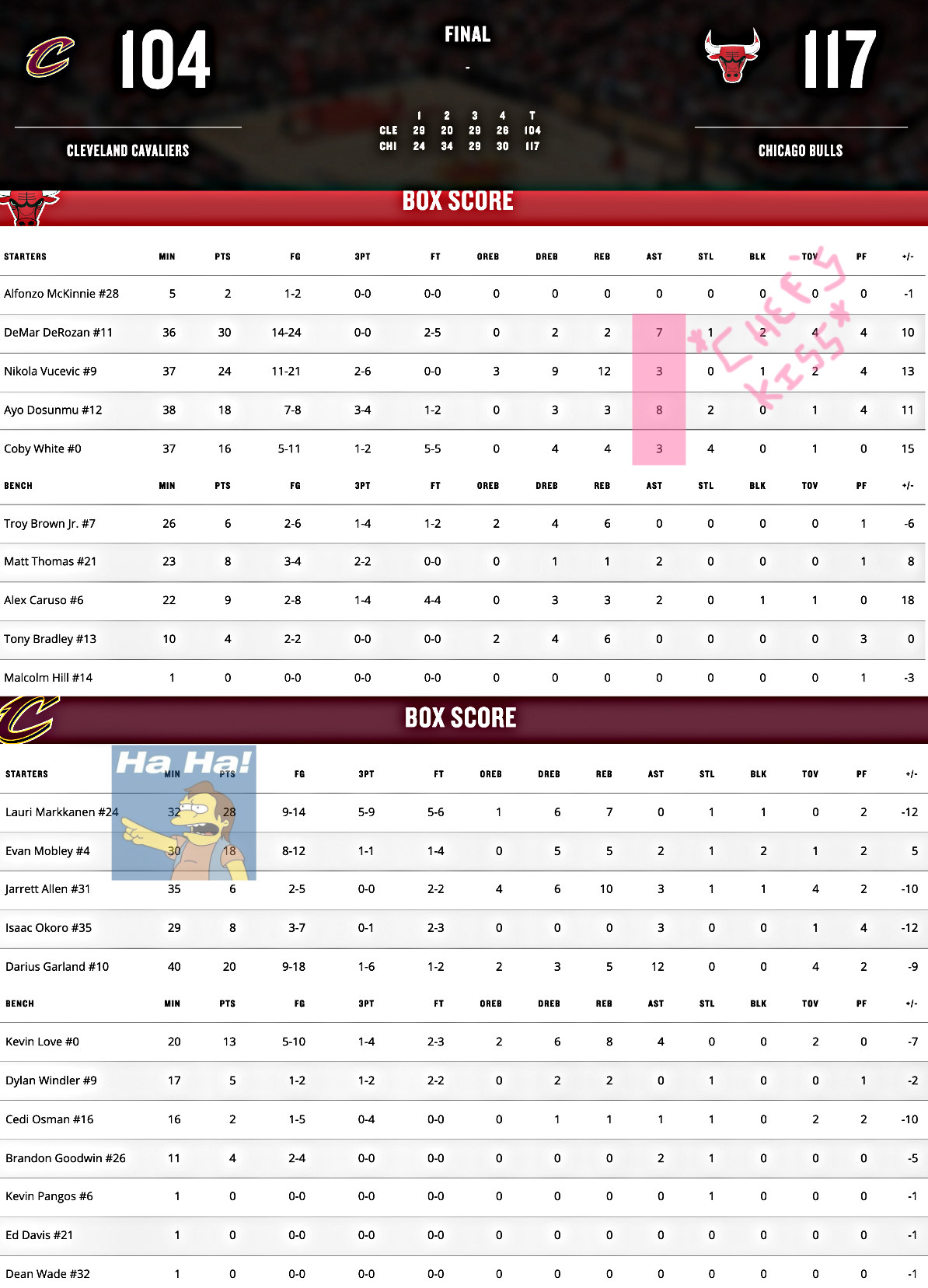