The Cubs Will Be Fine Without Mark DeRosa Skip to content 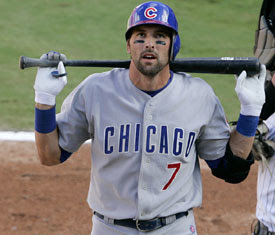 You can’t go to too many corners of the Cublogoverse these days without reading some angry diatribe about the Mark DeRosa trade.

In late December, DeRosa was traded to the Cleveland Indians for three somewhat unimpressive pitching prospects. At the time, Cubs fans were sated with the knowledge that surely the deal was merely a precursor to a trade for Jake Peavy – after all, the Padres had previously asked the Cubs for a bevvy of pitching prospects, and now the Cubs were loading up.

But then the weeks passed with no Peavy. And then, in what many saw as the deathknell for a Peavy trade, the Cubs dealt Ronny Cedeno and Garrett Olson – players in whom the Padres had interest – to the Mariners for Aaron Heilman.

The suppressed anger that fans held bubbling below the surface about dumping Mark DeRosa – so valuable the last two years – percolated into a steaming cauldron of rage. You can read about it almost anywhere you look.

As Barry Rozner recently contended, DeRosa’s value to the Cubs has been dramatically overstated.

As for DeRosa, you would expect him to have a good year as he seeks the last substantial contract of his career. At the same time, he’ll be 34 in a couple weeks and the odds are against this burst of youth continuing much longer.

It’s worth noting that he averaged 220 at-bats for the five years preceding his free-agent year in Texas, when he suddenly jumped to 500-plus at-bats for three straight seasons. Daily Herald.

Incomplete, but Rozner’s on the right track. And I’ll ignore the obvious counterargument that the reason DeRosa found success the last three years is because he finally got 500-plus at-bats for three straight seasons. So don’t make it.

Cubs fans shreak about DeRosa’s versatility, and how irreplaceable it is. Yes, DeRosa could play a lot of places – with the Cubs, he saw meaningful action at second, third and in right and left. But that doesn’t mean he was any GOOD at those positions. His defense at second, his primary position, was roundly criticized. When a chasm opened in right field before last year, the rumor de jour was that the Cubs could go get Brian Roberts and plug DeRosa into right field permanently. This was never, never seriously considered.

Offensively, despite what Cub fans like to believe, DeRosa was essentially an average performer in 2007 (102 OPS+, recall that 100 is average), and was moderately above average last year (118 OPS+). Could the most valuable player on the team really have trailed Carlos Zambrano in offensive performance? (Big Z put up a healthy 124 OPS+ in his at bats)

Memory is a funny, fluid thing. It’s easy to forget that, offensively, Geovany Soto outperformed Mark DeRosa last year. And of course, so did Aramis Ramirez and Alfonso Soriano. In the at bats they had, so did Jim Edmonds and Mike Fontenot.

Would I prefer that the 2009 Chicago Cubs had Mark DeRosa? Sure. But are the wheels going to fall off without him? Of course not. A properly-used Mike Fontenot/Aaron Miles platoon could easily match Mark DeRosa’s offensive production last year.

And you know what? I bet they could cover second, third, right field and left field just as well, too.