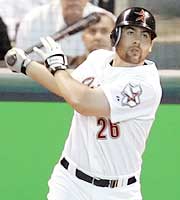 Though the Chicago Cubs are currently set to begin the regular season with just one backup infielder on the roster (Aaron Miles), I have repeatedly contended that the team will keeps its eyes open for another backup – particularly one who can backup on the left side of the infield.

The Cubs may look at signing veteran infielder Mike Lamb to a minor-league deal as security in case of an Aramis Ramirez injury. Milwaukee just released him. chicagotribune.com.

That sounds a little more like the team would want him to stash in the minors rather than actually giving him a bench job. Lamb is only one year removed from back-to-back .800 OPS seasons, so it is hard to imagine him not being able to secure a ML bench job somewhere.