Why the 2010 Milwaukee Brewers Will Suck Skip to content

Editor’s Note: Yes, it’s that time of year again – the time for us to settle back into our protective bubble where the Chicago Cubs are destined for greatness, and every other team in the National League Central is bound for spectacular failure. If you’d care to check out last year’s fare:St. Louis Cardinals, Cincinnati Reds, Milwaukee Brewers, Pittsburgh Pirates, Houston Astros. Already featured for 2010: Cincinnati Reds, Houston Astros.

The 2010 Major League Baseball season is nearly upon us, and that means two things: (1) we’re all so deprived of real baseball action that we’re willing to treat meaningless Spring Training games like they’re the playoffs, and (2) the prognosticators are out in full force. Yes, every sports publication in the world puts out a season preview. Some are interesting, some aren’t. For the most part, folks just don’t have the time necessary to do the kind of in-depth preview that is going to be of any use to a reader that actually follows the team being previewed.

So most previews end up being pretty surface level, and boring. Well, we’re not going to do that here at Bleacher Nation. It’s much more interesting (notice how I subtly pat myself on the back?) to simply examine why the team currently sucks and is going to suck in 2010.

So enjoy – we’ll be previewing the suckiness (suckosity?) of the other teams in the National League Central over the next five weeks. Up next, Bud Selig’s favorite beer-swillers, the Milwaukee Brewers.

The Brewers were 80-82 last year, 11 games out of first place in the NL Central, in third place behind the Cubs and Cards. For a team expected to contend for first place, the season was a clear disappointment – despite finishing in third, the Brewers never really felt like a threat to take the division.

Last year, we had this to say:

The rotation is in shambles after the departures of Sabathia and Sheets. Yovani Gallardo looked great and promising as a number three, but when he’s bumped all the way up to number one, he looks untested and unnerving. The rest of the rotation, currently sans Looper, is a mish-mash of guys absurdly overpaid guys like Jeff Suppan, guys the Cubs love crushing like Dave Bush, and thoroughly meh dudes like Manny Parra and Seth McClung.

Boom’d it. The Brewers finished the year 27th in team ERA. Their starting pitching didn’t do much to help the cause, repeatedly taxing the bullpen – the Brewers’ staff had exactly one complete game last year.

Brewers fans in the comments had this to say:

At least that suckiest team managed to win a playoff game…something the Chicago Chokes haven’t managed to do since when…the Nixon administration. Why don’t you worry about how sucky your team is come playoff time and let the rest of us worry about our own teams.
Typical Chicago Sports Fan…NO CLASS WHATSOEVER!!!

Hey. When you take the hooker somewhere nicer than Red Lobster, you can talk to me about class.

The Brewers have been quietly active this Winter, but it’s been much ado about nothing. Swapping J.J. Hardy for Carlos Gomez is simply a shift of defensive balance, and unless Alcides Escobar is ready to replace Mike Cameron’s bat offensively, the swap made the Brewers worse at the dish. Randy Wolf is an adequate middle of the rotation type whom the Brewers are expecting (and paying) to be a front-end guy. LaTroy Hawkins is 37, but was brilliant for the Astros last year. Wait, that’s not a thing that sucks. Um, they gave him two years and $7.5 million, which is kind of a lot for a guy like Hawkins on a team like the Brewers. Whew. No unnecessary compliments here.

Their Very Own Blogoverse Thinks They Suck

When perusing the Milwaukee Brewers’ blogoverse, one thing becomes clear: they are as confident in their offense as they are concerned with their pitching. Brewers blog Brew Crew Ball described the leading two contenders for the final two spots in the Brewers’ starting rotation this way:

[Manny] Parra’s 2009 season was among the worst by a starting pitcher in franchise history, but the potential for much better things is still there. At 27 years old, Parra is starting to get a little too old to be a guy who “still could put it together,” but that’s where he is right now. Unless he’s absolutely terrible in camp, he’s on the roster.

Wow, smell that optimism. And next:

[Jeff Suppan will make the Brewers if he] gets anyone out this spring. The early innings of spring training games may be more important for Suppan than any other pitcher in camp, as he needs to prove he can still get elite hitters out if he wants to be an asset to this team. Suppan most likely has two chances to make the team: the last spot in the rotation and the final spot in the bullpen….It would be hard to be as bad as Suppan probably needs to be this spring to get released. When you combine his massive contract and veteran status, it’d be difficult at best for the Brewers to admit their mistake and cut him loose. It might be what they should do, but it’s unlikely. Even if he’s iffy in camp, he might be stashed as the garbage man in the bullpen’s final spot. And if he wakes up with a headache this spring, the Brewers may give him two aspirin and a spot on the DL to recover.

Sounds a bit like our discussions of the Cubs’ final two rotation spots – but more dire. I never thought I’d be so happy to be relying on guys like Sean Marshall, Tom Gorzelanny, Jeff Samardzija, and a gimpy Ted Lilly. Oh, did I forget Carlos Silva? No, I did not. But maybe the Brewers could use him…

The Suckiest Part of Their Suck

It’s the rotation, and it’s not really close.

The bullpen has some issues, and it’s anchored by a man who is exactly 63 years old, but that man was absolutely dominant last year. Defensively, the Brewers figure to be solid, and offensively, there’s little doubt that they’ll be good.

But the rotation is a mess. Yovani Gallardo was deceptively mediocre last year – his 3.73 ERA and 13 wins look good, until you slide your eyes over to the merely slightly above average 108 ERA+ – and he’s just a year removed from missing nearly an entire season with a torn ACL.

Randy Wolf was brought in to headline the rotation, and although he did manage a very good 2009 season (in pitcher friendly Los Angeles), his preceding three seasons, in reverse chronological order, read as follows: crappy, injured and crappy, and injured and crappy. Maybe he’ll be the ace the Brewers need, or maybe he’ll be be what he’s been for most of his career: an average pitcher who happens to throw with his left hand.

Doug Davis is back to take over the third spot, and believe it or not, when compared against Wolf, Davis has actually been the better pitcher over the course of his career. Still, he hasn’t had an ERA under 4 in half a decade.

And as for the the bottom two spots in the rotation… um, well, a picture says a thousand words. Or, in this case, it says only the four necessary words: 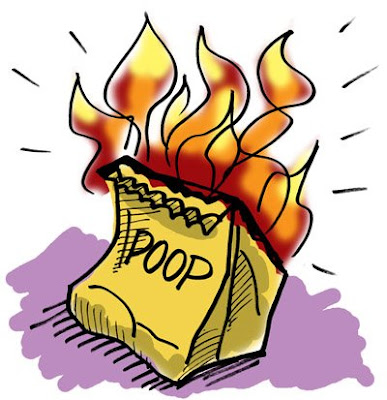 Why would you go to the trouble of writing the word “poop” on the bag if you were just going to burn it? Oh well.

And in the End

This is a decent team on paper, and is surely among the better looking teams in the NL Central. But it is not a fundamentally different team than the one that finished under .500 last year. What reason is there to believe that the 2010 Brewers will climb out of pitching purgatory? Randy Wolf and LaTroy Hawkins? I just can’t believe it.

And the lineup – the team’s strength – is not without issues. Ryan Braun and Prince Fielder will get theirs, but will Rickie Weeks stay healthy enough to continue developing? How much will the Brewers miss Mike Cameron’s bat? Unless Alcides Escobar starts hitting, between him, Carlos Gomez, and the pitcher’s spot, the Brewers might end up with three automatic outs at the bottom of the order.

Casey McGehee was a God-send for the Brewers last year (er, make that a Cubs-send), but there is literally nothing in his history that suggests his breakout 2009 campaign is repeatable. If he falters, is Mat Gamel ready to actually perform on the field instead of in the prospect rankings? And where is the other “t” in his name?

I’d follow up with the questions about the pitching, but the Bleacher Nation database is only so large. Suffice it to say, the Brewers better win when Wolf, Gallardo, or Davis are on the mound. And for that reason, if no other, the 2010 Brewers will suck.

And hey, here’ a gratuitous picture of Prince Fielder.