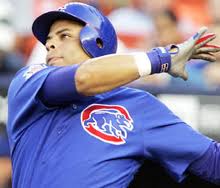 It was inevitable that trade rumors about Chicago Cubs’ third baseman Aramis Ramirez would pop up. Heck, we’ve been talking about them since May and June.

And, as the Cubs fell hopelessly out of contention around the same time that Ramirez erupted with one of the finest months of hitting in his career, those rumors got louder. And louder. At this point, if hold a seashell up to your ear, I’m pretty sure you can hear the ocean softly chanting, “but what about Ramirez’s 2012 option?”

The New York Yankees have been a prime destination for Aramis Ramirez for a few weeks now. A source told me last week to “watch Alex Rodriguez closely,” because, if he elects to have surgery on his knee, the Yankees will work hard on landing Ramirez. Well, Rodriguez decided yesterday to have the surgery.

The Yankees, of course, were reportedly interested in Ramirez before Rodriguez went under the knife, so the relatively short timetable on Rodriguez’s return – four to six weeks – may not serve as much of a deterrent to their efforts to acquire someone like Ramirez, who could DH after Rodriguez returns.

But the Yankees aren’t the only team interested in Ramirez.

Nick Cafardo writes that a number of other teams are interested in Ramirez as well, including the Mariners, Giants, Braves, and Diamondbacks, though he admits that Ramirez would be a questionable fit on some of them (where exactly would Ramirez play on the Giants? And, on the Braves, what about when Chipper Jones returns?)

But Cafardo says the “hottest interest” is coming from the Angels, who have had some level of interest in Ramirez in years past.

There remain two primary, and significant, hurdles to a Ramirez trade. The first, and most prominent, is Ramirez’s right to veto any trade. Something he has said – repeatedly – that he would do. He even said it again this weekend for good measure:

“You can look at what I said last month and write the same thing. Nothing’s changed,” Ramirez said. “I’m not going anywhere.”

The steadfastness of Ramirez’s assertion not withstanding, one source tells me that Ramirez would consider waiving his no-trade rights, at least with respect to the Yankees. Derrek Lee repeatedly said he wouldn’t accept a trade – and then he did.

Indeed, it’s possible that Ramirez’s assertions are a little bit of gamesmanship. I’ve now read in multiple places that Ramirez’s $16 million 2012 option does *not* automatically vest if he’s traded. If that’s true – and no one seems to know for sure – he’s certainly got an incentive to tell teams that he doesn’t want to accept a trade… unless they agree to pick up his option. Maybe that’s what happening here.

The second hurdle to trading Ramirez? The Cubs’ own needs. For good reason, the Cubs are unwilling to throw in the towel on the 2012 season, even if they’re willing to give up the ghost on 2011. And, with that in mind, who plays 3B for the Cubs in 2012 if not Ramirez? No, he’s not an ideal option – aging, expensive, ambivalent – but there’s neither a great option on the free agent market, nor a great option coming up the system. Josh Vitters isn’t ready (and might never be), DJ LeMahieu may never have the bat for 3B, and the same is true of Blake DeWitt.

That said, if Ramirez is willing to waive his no-trade rights, and the Cubs can find a deal that nets them a player or two who can contribute in 2012, they’ve got to pull the trigger, notwithstanding the impact it might have on 3B in 2012. It gives the team even more money to play with, and could infuse the kind of youthful talent and energy that’s been missing for almost a decade.