Reed Johnson "Drawing Some Interest" From Other Teams Skip to content 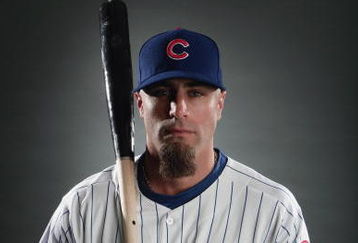 Reed Johnson has had a hell of a season. And he’s had an even better week.

He’s got seven hits in his last two games, and he’s got his OPS over .950. I semi-joked in an Enhanced Box Score that teams should be looking hard to Johnson as a fourth outfielder, and that joke is becoming a reality.

Johnson, hitting .349 with a .568 slugging percentage, is drawing some interest from clubs looking for another right-handed bat for a playoff run. While Johnson wouldn’t mind playing on a contender again, he said he would like to return to the Cubs.

“I hope so,” he said. “That’s always the plan. You never know what direction the organization is going to go, and what their plans are for outfielders. Hopefully I’m part of their plans. We’ll see. Being here, I feel like if the fans appreciate the way I play, then that’s always nice to feel.” chicagotribune.com.

Nothing as insubstantial as the future of a fourth outfielder on a team 16 games under .500 polarizes fans more than Johnson. It’s impossible not to be compelled by the way he plays the game, and by the way he’s been hitting this year. The fact that he wants to be a Cub only makes us like him more.

But he has genuine value that is going to waste on a team not in contention. Another team may not be willing to give up much to get that value, but something is better than nothing, no? And, it’s not as if Johnson couldn’t return to the Cubs in 2012 if each side so desired.

Moreover, his presence subjugates Tyler Colvin to the bench more often than not, now that Johnson is hitting so well – and now that Mike Quade has made clear that all he cares about is winning right now.

When asked whether he would consider putting Colvin into the starting lineup and leaving him there for a week or more to see what he can do (which was Jim Hendry’s explicitly stated reason for trading Kosuke Fukudome), Quade blanched.

“I won’t throw my veterans, who have been battling all year, [on the bench],” Quade said. “Especially Reed [Johnson] — what a year he’s had — and say, ‘You’re going to sit down for a week.’ No …. And these kids will get their at-bats and opportunities, but to me it’s not just, ‘Here it is, go get it and the rest of these guys can watch you play.'” Quade emphasized that, if Colvin is going to play, he has to “earn” that time. Which, of course, is hard to do when you’re always coming off the bench.

For this reason, perhaps more than any other, I suspect the Cubs will explore trading Johnson, if possible. Hendry, who controls who goes and who stays, says he wants Colvin starting. But, as long as Johnson remains in a Cubs uniform, that won’t happen. Maybe Hendry will force the issue by dealing Johnson. Indeed, maybe Hendry’s been happy to see this showcase from Johnson, who was injured before the non-waiver trade deadline and couldn’t be traded at that time. Either way, if Hendry’s going to act, now is the time – both in terms of Johnson’s value, and Colvin’s playing time.

I understand the consternation, though. Johnson is a bright spot in a dismal season, and gives fans something – and someone – to cheer about. He’s fun to watch.

As an aside, do other organizations so consistently have this issue of a GM and manager having divergent interests/beliefs/approaches, such that the GM regularly has to make moves to force the manager to do the right thing? This happened under Dusty Baker and Lou Piniella, too, so I can only conclude it’s a Hendry thing. It may seem unfair to criticize Hendry when it is the manager being obstinate, but, when it happens under three different managers, I can’t help but believe Hendry needs some work at getting on the same page with his guys. Or he needs to make better hiring decisions.