So, About Chicago Cubs President Crane Kenney Skip to content 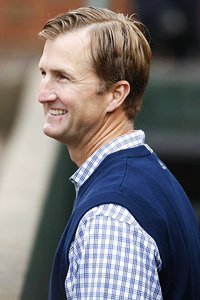 For years, we’ve been told that we’re supposed to hate Chicago Cubs President Crane Kenney. The media writes about him as though he slept with their collective mother, but, when it comes time to delineate just what he did to get under their skin, they offer vague allusions to meddling, glory-hogging, and Greek priests.

And, when the Cubs were searching for a new general manager, many shrieked in fear that Kenney would queer the deal – particularly when it became clear that the Cubs were looking at Theo Epstein, a man who would probably require a title higher than GM. I tended to sate myself with the belief that, if Tom Ricketts trusted Kenney, then that was good enough for me. If there’s anything Ricketts has done ever so clearly over the last year, it’s earn my trust.

I’ve said many times that, while I didn’t necessarily doubt there was reason to be wary of Kenney, I’d never quite seen it written. I tried my best to remain undecided.

Well, Paul Sullivan has done his best to decide for all of us, writing a long, thorough piece on the past and future of Kenney. Sullivan frames the article in terms of “what will Kenney’s role be now that Epstein is here,” but, to me, it’s far more valuable as a “here’s why so many of us hate Crane Kenney” article.

If true, it’s hard not to agree with those media members who repeatedly, if opaquely, dump on Kenney. A notable selection:

His business contacts and ability to enhance Wrigley Field revenues make Kenney a valued asset of the Ricketts family, while his reputation for turning the ballpark into his own playground annoys others. An associate of both Ricketts and Kenney said the Cubs owner feels they “owe” Kenney.

“Tom is an uber-fan when it comes to the Cubs, but he doesn’t know baseball,” the associate said. “He looks at Crane as someone who deserves his undying loyalty because he helped him with the financials of the sale.

“Someone advised Tom that he needed a sacrificial lamb when he took over, to separate them from (Tribune Co.). But he wouldn’t do it. He kept Crane, and really did nothing at first to change the culture, except to extend employees’ benefits. The talk at the (Tribune) Tower was that Crane wanted more than anything for the Rickettses to retain him so ultimately he could wind up commissioner of baseball.”

Those who’ve worked with Kenney describe him as a driven individual who ingratiates himself to whomever is in charge, whether it was at Tribune Co. or at Clark and Addison Streets. There’s no shortage of detractors, including one fellow board member of a local nonprofit organization that Kenney once served on. The source said their relationship soured almost immediately after Kenney touted himself as a fundraising expert.

“He made a big deal about how much money he was going to raise for us, and got some publicity for it,” the source said. “The day of the fundraising event, he showed up and didn’t get any of the money he’d promised, yet he acted like he’d done nothing wrong.

“When you’re dealing with nonprofit organizations, it’s a very polite world, and no one calls you out when you do something like that. I was in control then, so when it came time to reappoint (the board) I just made sure he wasn’t on it.”

Certainly not the most flattering portrayal. That story, you’ll note, is the kind of thing fans have no visibility to – but the media might. That’s why I was reluctant to deny the media’s distaste for Kenney, even if they hadn’t yet offered up much in the way of proof. But, without that proof, neither was I willing to just jump on the “Clown Kenney” bandwagon. Now, I’m leaning that way.

Still, I tend to suspect that Kenney can’t possible be as bad or as meddling as he’s portrayed, or Tom Ricketts would have given him a swift boot when he dumped Jim Hendry. There are rumors that Kenney remains invaluable to the Wrigley Field renovation process – specifically, the procurement of public funds – and, as soon as that process is formally set into motion, he will be broomed. I doubt too many would cry out in sadness if that happened.

In the meantime, Kenney’s role has clearly been marginalized. While Kenny will remain on board, for now, as the Cubs’ President of Business Operations, his involvement in any way with the baseball side of the organization is at an end.