Atlanta Braves' GM on Dempster: "We Have Moved On" (UPDATES: But Says Deal isn't Dead?) Skip to content 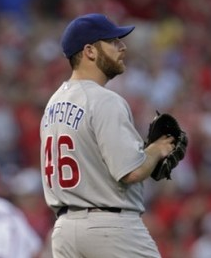 Atlanta Braves’ GM Frank Wren was on the radio this morning, and his message changed dramatically from last evening’s “we’re ready to wait on Ryan Dempster” line.

“We’re not going to be painted into a corner,” the GM said on an Atlanta radio station this morning. “We have moved on.” Wren added that it is “highly unlikely” that the Braves will now acquire Dempster, and said that the parameters of the deal the two sides had in place “expired yesterday.”

Leverage grab? Maybe. But, either way, this is terrible news for the Cubs. Your hopes for Randall Delgado – which, just two days ago seemed like an expectation, not a hope – have probably been dashed. Wren doesn’t flip flop his statements so completely in the span of 15 hours unless he received new information.

It was unfair to expect the Braves to wait too much longer on Dempster, and even if the story hadn’t broken on Monday, this is how it might have played out. It seems Dempster does not want to go to Atlanta, for whatever reason.

This will probably become the home to many more updates as we approach Dempster’s scheduled start today (he’s in the lineup, as of right now).

UPDATE 1 (at 8:39am CT): This is just my own thought, not a substantive update. What I can’t understand, and what I hope we’ll soon find out: if Dempster didn’t want to go to Atlanta, and he was kept in the loop on everything, why in the world did the Cubs go to the trouble of not only negotiating, but finalizing a deal with the Braves? The narrative that has made the most sense to date is that Dempster was willing to go to Atlanta if the Cubs couldn’t work something out with the Dodgers, and he asked for a delay in accepting the Braves trade so that the Cubs could go back to the Dodger well one more time. The only way that narrative is now true (and it’s just about the only narrative that paints Dempster in a favorable light right now) is if a *good* trade with the Dodgers is immediately forthcoming. The overnight Hanley Ramirez/Nate Eovaldi trade suggests that’s possible, but Dempster is still in the starting lineup for the Cubs.

UPDATE 2 (at 9:06am CT): As you reflect on the above, think on these quotes from Dempster to the media before last night’s game: “It makes it harder when something that wasn’t supposed to be public knowledge becomes public knowledge, especially before I even knew it was public knowledge. That’s when it gets harder is when you get everybody’s opinions of what is going on and it really isn’t what was going on or what took place. You don’t really get to focus your full attention on what you’re trying to do you have to focus on everybody’s perception of what is going on.”

UPDATE 3 (at 9:25am CT): From Buster Olney: “The Dodgers are feelingly increasingly confident they can work out a deal for Dempster, because CHC don’t have many alternatives. We’ll see.” As far as we now know, the Cubs’ *only* alternative is to keep Dempster through the deadline, and then make him a qualifying offer ($12.5 million) after the season, hoping he rejects, and they can get a draft pick after the first round. Randall Delgado, that is not.

UPDATE 4 (at 9:30am CT): Here are the more complete quotes from Frank Wren, thanks to Doug Padilla: “I think it’s very highly unlikely. We put parameters on the deal that expired [Tuesday]. We were moving on from the time we heard that there was the potential of another club being really where he wanted to go. And he had a lot of personal reasons for that. We haven’t stopped pursuing other pitchers. We’ve had scouts in ballparks seeing everyone. It’s one of those bumps in the road but at the same time we put parameters on it that expired yesterday so we’ve moved on.” In other words, from Wren’s perspective, Dempster didn’t want to be in Atlanta for personal reasons, and the Braves didn’t want to keep waiting on a guy who didn’t really want to be there.

UPDATE 5 (at 9:45am CT): A lot of fan anger toward Dempster is based on the idea that Dempster has previously said that he would go wherever the Cubs could get the best offer. I’m not sure that’s exactly what he said, though he did allude to it. The statements came from an early June radio interview, which I wrote about here. Here’s the relevant quote: “I don’t know what direction they want to go, I don’t know any of those answers. Whatever it ends up being [i.e., if it’s a trade] I’ll have to take a look at it and see what’s the best for me, best for the Cubs and I respect that and I understand that. Hopefully I’m here, but if not it’s somewhere that can ultimately give them the best opportunity to improve the Cubs for the future. I believe I’m a part of that and trying to help us for the future and help us for the present as well.” So, did he really say that he would go wherever the Cubs could get the best offer? Not exactly. But close. I guess he did also add this in a separate interview with Paul Sullivan: “Any one of us is susceptible to being traded. For me, it’s a little different because I have the right to say ‘no.’ … Obviously I want to do what’s best for this organization. They’ve done nothing but right by me.” Hmm.

UPDATE 6 (at 10:21am CT): Wren just backtracked on his backtrack ever so slightly, saying that the deal isn’t dead, and the Braves haven’t ruled out a Dempster deal. It’s just very unlikely. We do know that some “parameters expired” yesterday, which I’m still going to assume is Randall Delgado.

UPDATE 7 (at 10:32am CT): Buster Olney and Jim Bowden report that the Cubs now plan to keep Dempster through the deadline (and try to get a pick after the season) unless offers improve. To me, that sounds like a desperate intentional leak to get the best possible offer before Dempster’s start today.

UPDATE 8 (at 10:54am CT): Jon Morosi says a Dempster deal with the Dodgers isn’t dead, but a source tells him the Cubs are frustrated after losing leverage. Source? Yeah, that source would be everyone who’s been paying attention.

UPDATE 9 (at 11:02am CT): George Ofman, who’s been ahead of a lot of this stuff, says this: “Stuff is very fluid. Minute by minute. Braves deal not completely dead.”

UPDATE 10 (at 11:31am CT): Interesting. Buster Olney reports that the Cubs are still hoping Dempster changes his mind on the Atlanta deal. Is it still available, then? He adds that the Cubs hope that decision comes quickly, though, because the Braves are still looking elsewhere.

UPDATE 11 (at 11:34am CT): Len and Bob just did their pre-game thing without any mention of Dempster not making his start today. It’s almost like they were avoiding it intentionally (all Bob said was that Demp had some distractions to work with).

UPDATE 12 (at 11:43am CT): Here we go. Ryan Dempster is actually starting this game. I am incredulous.

UPDATE 13 (at 1:25pm CT): Through six innings, Dempster’s given up three runs, but one was on a cheapy solo homer down the line. He allowed just five hits, no walks, and struck out six. That’s actually a pretty great start. He was pretty pissed after that sixth inning, though, where he gave up the lead with two outs. He shoved a water cooler and chucked something against the wall.

UPDATE 14 (at 1:53pm CT): To be clear: the “meltdown” that you’re going to hear a ton about from the media was all kinds of nothing. He shoved a cooler, and threw a cup at the wall. That’s it. He wasn’t out of control, he didn’t endanger himself or others. It was the kind of thing that happens ALL THE TIME in dugouts. I’m a media defender, but other folks – especially those who weren’t actually watching – blow this up to more than it was, I’m going to be displeased.