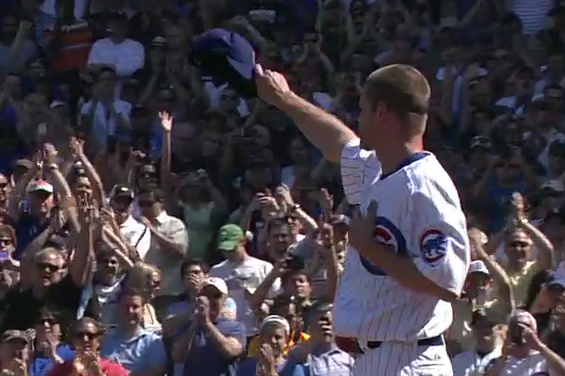 Although his re-signing in the offseason made for a feel-good storyline, Kerry Wood’s big league career came to an end in May after time and arm troubles contributed to a decline in stuff.

The retired great isn’t ready to leave baseball, though. He hinted at a desire to stick with the Cubs in some capacity back when he retired, and it sounds like he’s getting closer to returning in some formal way.

“We’ve kicked some ideas around,” Wood said of his future role with the Cubs organization, according to Sahadev Sharma. “[I’ve] met with and talked to Theo about it. We’re all kinda on the same page and I’m sure we’ll get something done soon and work out all the details. [I] definitely want to be around and definitely want to be involved. In what aspect, we’ll figure that out probably this Winter.”

You can expect to see Wood at Spring Training, at a minimum, working with young pitchers, helping them improve and harness their stuff. From there, it’s possible Wood could continue to work in an instructor role, or in the front office (which, a la Greg Maddux, could also involve some roving instruction).

And he hopes he’s not the only former Cub who returns to the organization, mentioning guys like Maddux, Mark Grace, Ryne Sandberg, and Sammy Sosa.

“Hopefully we’ll get Ryno back,” Wood said. “Actually, it wouldn’t be bad thing to see Sammy [Sosa] come around too. He did a lot for this organization and a lot for this city. It’d be a shame for him not to come back.”

Sandberg just finished another season managing the Phillies’ AAA team, and is expected to be considered for a big league job in that organization (either manager or coach) soon. Sosa hasn’t done much in organized baseball since retiring five years ago. His time with Cubs was a bit tainted at the end, when, after a late-season collapse (freaking LaTroy Hawkins and Victor Diaz), Sosa left early on the last day of the season. Couple that with ill memories of the corking incident, his playing decline, and his connection to steroid allegations, and Sosa has become something of an afterthought among fans when they recall the Cubs greats of recent memory.

With some time passed, I think it’s fair to believe that Sammy would be welcomed back should he want to return to the organization in some role (probably more ceremonial than anything).