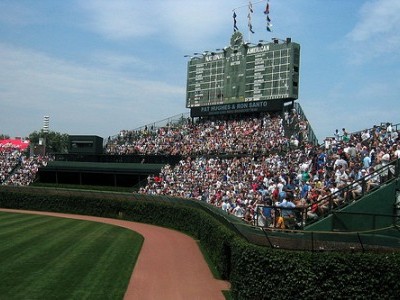 Historically, the Cubs play their Friday home games at 1:20pm CT, and their Saturday games at some point in the early afternoon. When they installed lights at Wrigley Field in the late-80s, the team agreed to have only a small number of night games throughout the season, which limitation has included Saturday night, on which the Cubs can have night games only if they are part of a national broadcast.

The Cubs are polling season ticket holders and area residents about start times for Friday and Saturday games. Essentially, the Cubs are asking folks how they’d feel about later starts on Friday (moving from 1:20 to 3:05pm), and more night games on Saturday.

The ostensible argument for later Friday games is to accommodate more folks who’d like to come from work. For Saturday night games, it’s to alleviate neighborhood congestion earlier in the day (things can get jammed up in the area as early at 10am for a noon start).

The real reason? Well, I mean, I’m sure it has a bit to do with bringing more folks to the game, which is about generating more revenue. No complaints here, as I’d definitely be in favor of later Friday games (just feels like a nice way to settle into the weekend, but without taking up all of Friday night), and I’m fairly ambivalent on Saturday night games versus day games. Further, I’ve always been a proponent of fewer day games for the Cubs, because I buy the theory that it puts Cubs players at a disadvantage relative to their competitors.

So, I’m inclined to say that, were I responding in the poll, I’d go with “yay” on later Friday starts, and “whateves” on Saturday times.

What do you all think?