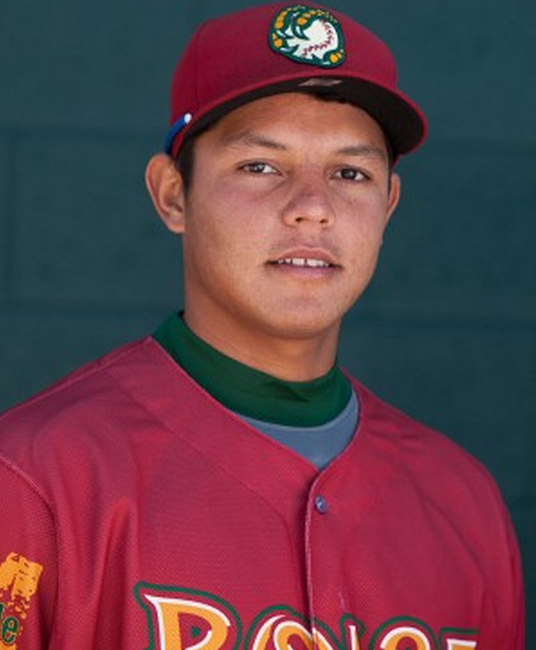 The Hot Stove League may be firing up, but around here we still have the cold, clouds, and wet left behind by a certain hurricane. That continuing tropical connection has me tempted to go back to Daytona for two more prospects, but I think I’ll change things up this round. Let’s go with one of my personal favorite prospects for the positional player, and a guy who had a season that makes as little sense as that ridiculous storm for the pitcher.

Disclaimer: Prospects’ Progress is not a top prospects list, ranking system, or recipe for chocolate chip cookies. It is a regular feature in which I break down the 2012 season for two of the Cubs’ players with an eye towards their progress towards their ultimate goal of reaching Wrigley.

It is no secret that I am fan of Amaya. After he posted a .927 OPS in the Arizona Rookie League as an 18 year old, I was not the only one. He entered the 2012 season with one of the highest ceilings among the Cubs’ deep, deep pool of second base prospects. He also entered with no experience above the Arizona Rookie League. In 2012 we needed to see that Amaya could consistently take advantage of his tools both at the plate and with the glove and that he could continue to produce as he played against tougher competition. The Cubs opted to send him to Boise, and Amaya did not disappoint.

Actually, before Amaya sent to Boise he was assigned to Iowa as an emergency bench player while the Triple A Cubs were playing out West. Amaya got one at bat in his final game with the Iowa Cubs; he doubled. That means Gioskar Amaya is the proud owner of a Triple A line of 1.000/1.000/2.000. That’s an OPS of 3.000, if you’re counting.

When he went to Boise later in the summer, he picked up right where he left off. Amaya’s season line of .298/.381/.496 is positive enough, but the news actually gets better as we drill into the numbers. For example, Amaya finished the season with a very strong walk rate of 10.4%. He also managed the rare feat of hitting more home runs and more triples than he had doubles (6 doubles, 12(!) triples, 8 home runs). His twelve triples led the Northwest League by a wide margin, and his eight home runs were good enough to finish ninth. He was sixth in total SLG.

Keep in mind that we are talking about a second baseman here. At the age of eighteen he is competing in the power hitting categories with mashers like Mike Zunino and Dan Vogelbach (although it should be noted that Amaya played in more games than either of those two, so ‘compete’ is probably a little strong). That tells us quite clearly that Amaya is a legitimate hitter. He is not inflating his average with cheap hits that will disappear at higher levels, he is squaring up the ball and consistently driving it into the outfield. It is very encouraging to see a middle infielder do that at this age. He also stole 15 bases in 20 chances, another positive sign.

He appears to be progressing nicely with the glove as well. In 284 chances over 59 games at second base, Amaya made just nine errors. That is quite good for a young infielder. We’ll get a better read on how his quickness, range, reactions, and throwing accuracy will play out at higher levels as he moves into the full season leagues next year, but for the time being there is every reason to think he has the tools to handle second base. Just a year ago he was splitting his time evenly between second, short, and third; that bodes well for his athleticism and defensive ceiling.

As exciting as his career numbers are so far, he is very young and has been playing very low in the minors. The potential is clearly there for Amaya to become a high quality asset for the Cubs, but he has plenty of work to do before he reaches Wrigley. First, he needs to survive the tougher pitching in Kane County and Daytona. More than one prospect has piled up the stats in the Northwest League, only to come crashing back to earth in the humid air of the Midwest League. And while Amaya is adjusting to that tougher pitching, he will also need to keep his strikeout rate in check. In Boise he finished at 20.5%; that isn’t bad given his OBP and SLG, but it could be on the high side if his power does not translate in the higher levels.

I am all but certain that Amaya will be the starting second baseman in Kane County next season. If he gets off to a hot start, I would not be completely shocked to see the Cubs challenge him with a rapid promotion to Daytona. In the meantime, I have to figure out how he compares with the other second basemen in the Cubs’ system. Logan Watkins and Ronald Torreyes will be competing with Amaya for top billing when I rank that position, and I am not certain which way I’m going to call it. That is a good problem to have.

Once upon a time, Jay Jackson was one of the better pitching prospects in the Cubs’ farm system. Analysts across the baseball world looked as his control and pitch arsenal and confidently projected him as a future number three starter in the majors. In 2010 he validated all of those votes of confidence as he put up a 4.63 ERA and a .256 batting average against in the hitter friendly Pacific Coast League. Those numbers slipped in 2011, though, and Jackson entered the 2012 season with some serious question marks. After seeing him be repeatedly passed over for promotions and watching his numbers slide, we really did not know if he was still a pitching prospect or not. 2012 was supposed to be the year in which we got some answers.

Instead, we have even more questions. At first glance, Jackson’s 2012 campaign was a complete disaster. He appeared in 37 games for Iowa and finished with an ERA of 6.57, a WHIP of 1.714, a K/BB ratio of just 1.77, a horrific HR/9 of 1.5, and so forth. The season numbers are ugly stacked on top of awful no matter where you look.

But, as is so often the case in the minors, the basic season numbers do not tell the whole story. A large reason Jackson has those abysmal season numbers is because he was truly awful in nine starts. As a starting pitcher for Iowa, Jackson survived just 40 innings. His starting ERA was 9.23. Eight of the fourteen home runs he allowed on the year came as a starter. His GO/AO was just 0.98. He only struck out 31 batters in those 40 innings, and walked 20. As a starter, he was just bad. There is no other word for it.

As a reliever, though, he looks like a completely different guy. His ERA drops to 4.27, and his opponent’s batting average to just .253. His GO/AO jumps to a much healthier 1.27. He allows less than one hit per inning and strikes out very close to a batter inning. In short, he pitches fairly well.

The chasm between his awful numbers as a starter and his respectable numbers as a reliever is vast. One pitcher is not supposed to lower his ERA by about 5.00 simply by changing roles. The change in his GO/AO between the two roles suggests that he is literally a completely different pitcher as a reliever. The same set of pitches should produce numbers that radically different.

But they do. And it makes very little sense.

But he may be still be a prospect worth considering. Jackson did put up some very respectable numbers as a reliever. He does not look like closer material, nor set-up material for that matter, but I think he could fill some innings in the middle of the bullpen if he were given the chance to do so. And I think he will get that chance.

For someone else. I doubt Jackson is a part of the Cubs’ organization in 2013. He might be in the majors with a different team, or back in Triple A for another season as part of a different organization, but I suspect his best move might be to go to Japan. The pitches and the command that once made him a noteworthy pitching prospect are still in him somewhere, and they leak out when he moves into a relief role, but for some reason he just cannot harness those abilities as a starter. A change of scenery and plenty of innings might do him some good, and I suspect Japan is the only place he can find starter’s innings.

I doubt we’ve heard the last of Jay Jackson. I do think we’ll see him in a major league bullpen one of these days, but I doubt he will be wearing a Cubs uniform. There is a wave of mid-rotation and bullpen pitching prospects ready to flow into Iowa and the Cubs need that slot on the Iowa roster. At the end of the day, despite his moderate success as a reliever, I think Jackson is a casualty to that game of numbers.