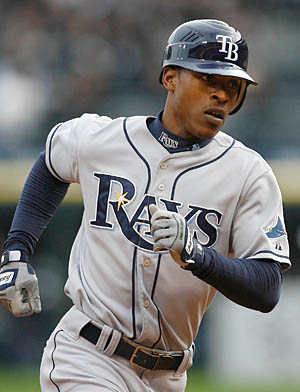 B.J. Upton is one of the better free agents on the market this year, and has been expected to sign this week for a few days now. In one of the less mysterious pursuits of the early offseason, most had him down to the Braves and the Phillies by yesterday, and it sounds like today the Braves sealed the deal.

Various reports have the numbers at five years and $70 to $75 million, with a possible sixth year option. Upton has already changed his avatar on Twitter to a Braves logo, so I don’t think this is one those “confirmed deal! er, I mean, wait” kind of situations. The numbers might change slightly when they are finally announced, but that’s the ballpark.

In the end, Upton was never legitimately connected to the Cubs, however connectable he might have been. In the Cubs’ eyes, perhaps, the marks in favor of Upton – his age (28), his athleticism, his increasing power, and his overall upside – were outweighed by the downside risk – some of his numbers trending downward, his elevated K-rate, and his contract demands.

But, given the increasingly rare 28-year-old free agent who can fill a position of need without hampering the organization long-term, I’m just a touch salty to not have seen the Cubs even involved, particularly at a really digestible price. Upton has been averaging a 4.0 WAR since he moved to center field in 2007, and, with the price of a win expected to be right around $5.5 million, you can see how he’s very likely to be worth his contract. Had the Cubs considered Upton, they could have accommodated Brett Jackson (if he becomes ready) by moving one or the other into a corner position, and shipping out Alfonso Soriano or David DeJesus. Jorge Soler and Albert Almora are still years away.

Don’t mistake me: I’m not angry, and I can understand the reticence to commit to such a tricky player like Upton. Let’s hope the Cubs did some serious due diligence.