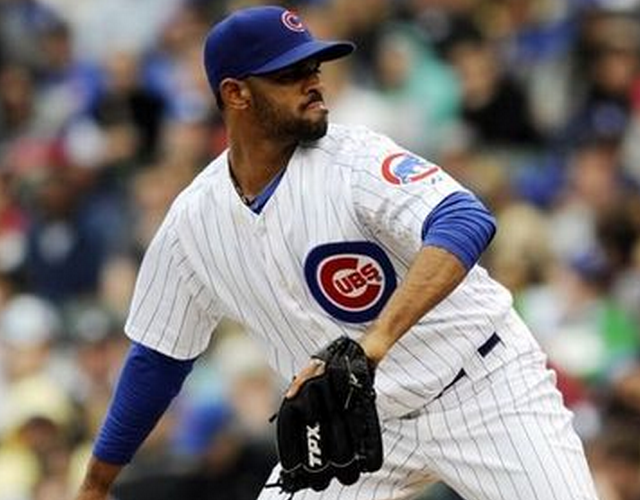 [An annual piece of the Winter Meetings pie, the Rule 5 Draft takes place tomorrow, the last day of the Meetings. The Cubs have the second pick, behind the Astros.]

I love the Rule 5 Draft, and I hate it. I love that it is the one time of year when everyone is talking about the lesser known, fringy prospects that usually lurk outside the spotlight, but hate that it is the one column I write in which I will not make a single correct prediction. Players who are eligible for the Rule 5 are a sort of a baseball version of a Rorschach test. Every team looks at the same players, appears to see something completely different, and those of us on the sidelines are left scratching our heads.

And this might be the most confusing year I’ve seen in a long time. The Cubs could do almost anything, and there are a lot of very interesting players available that they could grab. Last year, remember, they reached back and snagged Lendy Castillo… a guy with little pitching experience… out of A ball. That was a bit of a surprise. This year?

We’ll find out on Thursday.

In the meantime, lets’ break down the possibilities.

Trade – The Cubs could trade the pick, likely to a contender needing one cheap bench or bullpen piece, and take back a fringy prospect who would not have to be kept on the 25 man roster in exchange. This would be the safe play for the Cubs. It nets them talent, buys them time to develop that talent, and does not burn a roster slot. If the Cubs do trade the pick, we may not know for half an hour or so after the draft is over.

Pass – The Cubs could simply pass when their turn comes up (the second overall pick) and choose no one. This would surprise me. The Rule 5 draft is the closest thing to a free prospect a team is likely to find, and the Cubs should have the roster flexibility to carry that prospect just like they did Lendy Castillo. I can’t see the Cubs walking away on Thursday having made no moves at all.

Catcher – Drafting a catcher would be a complete shocker. The Cubs already have three catchers on the 40 man roster; I sincerely doubt they would snag a fourth who has to be kept on the 25 man roster. I think we can rule this possibility out.

Infielder – The Cubs have a lot of infield depth in the farm system, but they are a little thin at the highest levels. Believe it or not, the Cubs do not currently have a backup infielder on the likely 25 man roster. Assuming Valbuena is the current third baseman and Vitters is ticketed for Iowa, the Cubs are only carrying four infielders on the 40 man who are likely to break camp with the Cubs in the spring. If the Cubs find a third baseman, Valbuena may become that backup guy, but for now the position is vacant. Add it all up and I think we have to concede that drafting an infielder is a real possibility. Just don’t expect the Cubs to land a starting third baseman.

Outfielder – This is a deep class of eligible outfielders. If the Cubs want to maximize their value, this might be the place to do it. Given the number of outfield holes they need to fill and their lack of depth in Iowa, the stars might be aligning for the Cubs to snag a good defensive outfielder with some offensive upside. Provided they can find one, of course.

Pitcher – Regardless of whether his long term future is in the rotation or the pen, any Rule 5’d pitcher is almost certain to work out of the pen next season. This is probably the safest place for a team to grab some talent, but it is not always the position where the highest upside can be found. Since the Cubs do have the second pick this year, I would not be surprised to see them pass on pitching if they see some higher upside hitters still on the board. The Cubs have a ton of back of the rotation and bullpen arms in the high minors already, and they are not likely to find a future ace in the Rule 5 listings (although it has happened before). Still, the best place to stash a pick is in the bullpen, and that is a factor that cannot be ignored.

If I had to rank these option in order likelihood, I think it would be: Outfielder, Trade, Pitcher, Infielder, Pass, Catcher. Those first three are separated by razor thin margins, though.

So, who might the Cubs take? MLB.com has complied a nice list of twenty names worth knowing, but many of those are not guys I think would interest the Cubs. Brett and I have complied a few names of our own (including some who also appear on the MLB list) who are more likely to be on the Cubs’ radar. Odds are good that the Cubs will wind up picking someone else entirely, but this is not a bad list to have handy when the draft rolls around.

Tim Crabbe – RHP – Reds: Baseball America said he had the best slider in the Reds farm system prior to the 2012 season, and his minor league K/9 bears that out. The walks got away from him when he went to Double A this year, but I think his slider might be good enough to keep him alive in a bullpen role for a season. Long term, he has a shot at becoming a reliable starter.

Kenny Wilson – OF – Blue Jays: Imagine Tony Campana with defense and you have an idea what Wilson might bring to the Cubs. I don’t think he is quite as fast as Campana (few are), but he should have more value in the field. He would essentially replace Campana as the fifth outfielder.

Jeremy Hazelbaker – OF – Red Sox: If you feel like gambling for the breakout star, this is your guy. He hit 19 home runs and stole 33 bases in Double A last year, on his way to a .273/.338/.479 line. In eight winter ball games he has posted an OPS of .911. There is a lot of potential here, but he likely needs to tight up his swing to really take advantage of it.

J.C. Sulbaran – RHP – Royals: Another high strike out guy, Sulbaran is coming off a rough season. In fact, I think his season was so rough, his BB/9 in particular, that is suggests some mechanical issues. If the Cubs staff think they can work with his form, he could be a gamble worth taking.

Odubel Herrera – INF – Rangers: Herrera ranked No. 27 on the Rangers pre-season Top Prospects list for Baseball America. He is described as having a short, compact swing that is the fastest in the Texas system. Intrigued? I am. He bats left handed, can handle second or short, and shows some good speed on the bases. The jump from High-A would be rough, but as a defensive replacement/pinch runner, it might work.

Josh Fields – RHP – Red Sox: I am honestly not sure why this guy was left unprotected. He’s on the old side, but he’s never pitched below Double A, and in two seasons of Triple A has posted a 10.8 K/9 to go with a 1.275 WHIP. His BB/9 is high (5.1), but the rest of his numbers are just good. If the Astros don’t grab him, the Cubs should be very tempted. Unless there is something I am missing here, he looks like he could legitimately compete for the 7th inning job right now. If the Cubs do trade their pick, this is probably the most likely guy to be taken as part of that trade.

If Theo and Jed wanted my advice, I’d probably shoot for some offensive upside and recommend Hazelbaker. Fields is probably the safest pick and Herrera might have the best swing among the available hitters, but I can’t pass on the chance to land a quality lefty bat with 20 HR / 30 SB potential.

When Thursday rolls around, though, I expect the Cubs will do something completely unexpected.

Oh, and they might lose a player or two, too. Last year, it was Marwin Gonzalez and Ryan Flaherty. Once again: anything can happen.