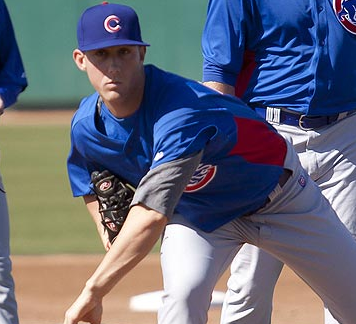 In anticipation of impending roster madness, the Chicago Cubs today opened up one spot on the 40-man roster by designating lefty reliever Jeff Beliveau for assignment. Beliveau is removed immediately from the 40-man roster, and the Cubs will have 10 days to trade, waive, or release Beliveau. Assuming they don’t have a trade on the horizon, they’ll likely go the waive route, in an attempt to outright him back to Iowa.

Will he be claimed if waived? Hard to say. Two years ago, Beliveau broke out in the minors, and was the Cubs’ minor league pitcher of the year. He had a shot to make the club out of Spring Training last year, but didn’t quite get it done. Eventually he did make it up to the big club in July, and was thought to be in the mix to be one of the lefties in the pen in 2013. I’m sure the Cubs hope they can keep him, again, barring a trade. He certainly has good stuff.

Beliveau threw 17.2 innings for the Cubs last year, and struck out 17, which is swell. Unfortunately he walked 12, which is not. His control issues were the very thing that held him back in the minors, and the very thing he corralled in his breakout 2011 season.

If Beliveau is out of the picture, the Cubs’ left-handed relief depth is hilariously thin. It’s James Russell and … Travis Wood? Brooks Raley? Chris Rusin? All of those three are nominally starters, so we’ll have to see what’s what. I’d expect a veteran lefty on the way at some point.

The move technically takes the Cubs’ 40-man roster back down to 39, but they’ve still got to add both Nate Schierholtz and Ian Stewart. There is also the possibility that Chang-Yong Lim’s deal will require a 40-man spot.