The Ricketts Family Agrees to Build a Hotel on McDonald's Property ... Conditioned on Wrigley Funding
Search
Skip to content 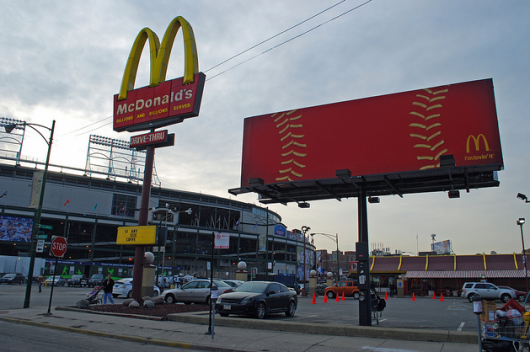 As noted earlier today, the Ricketts Family today announced an agreement with Starwood Hotels (the parent company of Sheraton Hotels, where the Cubs Convention is being held this weekend) to develop a boutique hotel on the McDonald’s property across from Wrigley Field, which property the Ricketts previously purchased.

The development of a hotel in Wrigleyville would come as a welcomed addition to folks who live in that area (as well as out-of-town fans), and has been discussed in the most recent Wrigley renovation plans.

However, development of the hotel (and the neighboring Triangle Property) is contingent on the Cubs first finalizing a funding plan for the renovation of Wrigley Field. In other words, the hotel – among other development ideas for the Wrigleyville area – is a carrot being held out by the Ricketts in order to help generate goodwill and interest in public funding for the Wrigley renovation.

“Once we know how we can save Wrigley Field, the Ricketts Family is looking forward to the opportunity to build a hotel across the street,” family spokesperson Dennis Culloton told the Tribune. “It could complement the neighborhood and its establishments while also serving fans and tourists.”

Help us, and we’ll help you. That’s the message. Of course, owning a profitable hotel in a relatively hotel-less area like Wrigleyville is probably its own reward, but I recognize that it would, indeed, be a good thing for that area. It would also generate more tax dollars for the city.

Since we already know that the hotel was part of the grander renovation plans, which are being announced on Saturday, and since we now know that the hotel is contingent on a Wrigley renovation funding deal, I’m thinking that the funding deal has essentially been agreed to. Otherwise, it would be really bold of the Ricketts to make this announcement, and the Cubs to announced the Wrigley renovation plans on Saturday, given that neither of those things is going to happen until a funding agreement is in place.

Once again I say: Saturday’s reveal should be very interesting.