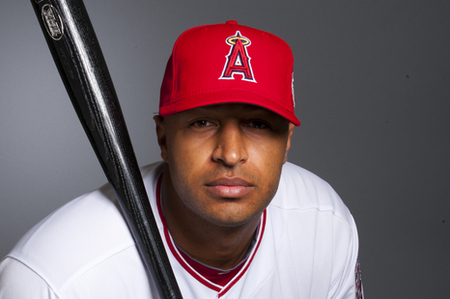 According to Jeff Passan, the New York Yankees are in talks with the Los Angeles Angels about their superfluous and overpaid outfielder, Vernon Wells. Passan says a deal could actually get done today, assuming Wells waives his no-trade clause. Jim Bowden reports that Wells is expected to accept a trade.

The Yankees’ injury woes are well-documented – each of Curtis Granderson and Mark Teixeira are out for a healthy chunk at the start of the year, and Teixeira could be out much longer, and Alex Rodriguez might not play at all this year – as is their need for a right-handed hitting outfielder. That they would fill the need with Wells, however, indicates just how desperate they’ve become.

Wells, 34, has had an OPS+ over 100 just twice in the last six years, and his line is an ugly .222/.258/.409 over the last two years. He’s got $42 million remaining on his contract through 2014, and Passan reports that the Yankees might actually be taking more of that on than “one might think.” If it proves to be more than just a couple million per year, then the Angels will be dancing in the streets.

A deal for Wells, however unattractive a solution he might be, would close the door on any deal between the Cubs and Yankees involving Alfonso Soriano (absent a second rash of injuries). Soriano, 37, is a better version of Wells on a better deal, but is similar enough that acquiring Wells would obviate the need for Soriano. Further, because Wells is already set to start the year on the bench in Anaheim, he might be more willing to accept a trade to a team that is eventually going to bench him than Soriano, who is rightly expecting to start all year. With the Yankees, Soriano’s future once Granderson returns in May becomes cloudy.

The Cubs and Yankees have almost certainly discussed a Soriano deal, but the Cubs wanted real value for Soriano. And, for his part, Soriano has said he wasn’t sure he would consider a deal to the Yankees until he’s had a chance to see how the Cubs perform in April and May. If the Yanks end up with Wells, I’ve got no real beef here.

We’ll see if the Yanks and Angels actually pull this off, and what the final deal looks like.

UPDATE: And, what do you know, Joel Sherman, who confirms Passan’s report, is openly wondering about Soriano, too:

Soriano at least hit well last year. But, because of that, maybe #Cubs want a legit prospect and Wells will not cost that. #Yankees

That’s my guess, too.

Why not A. Soriano for #Yankees? Most likely because #Cubs want actual value for eating bulk of remaining $36M. #Angels can't be as picky.

UPDATE 3: Multiple sources say the deal is going to get done. The Angels have already started clearing out Wells’ locker.