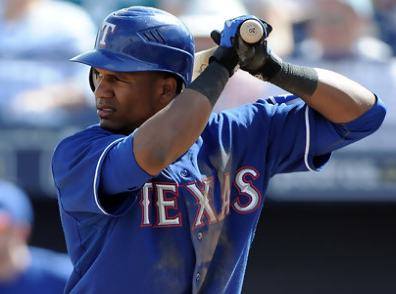 In a move that was almost certainly unrelated to his base running gaffe earlier in the day, outfielder Julio Borbon was designated for assignment by the Cubs late yesterday. No corresponding move was announced, but one is expected later today. It could just be something simple like Dave Sappelt returning from Iowa (after his 10 days down, he’s eligible to return now) or Brian Bogusevic coming off the disabled list (also now eligible to return).

Borbon felt like a roster stash when the Cubs grabbed the former Texas first round draft choice earlier this year, but he actually made it into 72 games with the Cubs. In that time, he hit just .202/.284/.279, and saw his playing time diminish greatly whenever guys like Ryan Sweeney and Bogusevic were available. Borbon had the tools to be a quality bench piece, but it just never quite came together.

With the Trade Deadline passed and both Nate Schierholtz and David DeJesus on the roster, I suspect the Cubs figured it was time they could let him go. The Cubs will now have 10 days to trade (not likely), waive (probably), or release (maybe) Borbon.

With Borbon DFA’d, the Cubs’ 40-man roster stands at 39. Over the coming weeks/months, you will see that number continue to fall as the Cubs brace for the offseason and the necessary shuffling that accompanies picking up new players and preparing for the Rule 5 Draft.