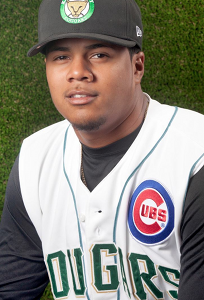 Third base has emerged as one of the strongest positions in the Cubs’ farm system. The perceived proximity of third base options like Mike Olt, Kris Bryant, and Javier Baez (not to mention options who used to play third, like Junior Lake and Josh Vitters) has drawn most of the hot corner prospect talk in those directions. The downside of that, however, is that we might be overlooking some very good infield options who are nearly ready to break out of the low minors.

Heading that list is Jeimer Candelario. Last season Candelario was young for his level, but responded by showing that he is a refined, disciplined switch hitter with plenty of projectable power left in his bat. He made some solid strides as a third baseman as well. Interested yet?

First, though, I offer this disclaimer. The goal here is not to re-rank the prospects (that comes next year) or to assess the strengths and weaknesses of farm as a whole (that also comes next year). The goal for this series is to take each prospect individually, study the progress made so far, and see what we can learn about the future for that player.

Jeimer Candelario, 3B
Born: November 24, 1993
Acquired: It cost the Cubs half a million to sign Candelario as an International Free Agent in the summer of 2010.

Given his age, even the red flags here really aren’t red flags. His SLG was weak, but he finished 3rd in the league in doubles, 26th in home runs, and posted an ISO of .140. And on top of that, we know that power is one of the last tools to develop in most hitters. It is easy to look at Candelario and see 20 to 25 home run power in a few years.

Fans of batting average will sneer at his paltry .256, but the double digit walk rate and low strikeout rate effectively demonstrate that this is a guy who knows his way around the strike zone. He may never hit for a very high average, but between the plate discipline and the projectable power I have little trouble envisioning him posting .800+ OPS figures before he leaves the minors. Candelario is showing nearly all the skills we look for in professional hitters, and he is doing so at a very young age.

Looking at his splits we find still more generally good news. Candelario displays most of his current power as a left handed hitter (.251/.341/.406, 10 HR, .343 wOBA), but that is offset by his higher contact rate and greater OBP as a right handed hitter (.277/.372/.375, 1 HR, .353 wOBA). From either side of the plate the the strikeout rate is healthy, the walk rate is very good, and the numbers project very nicely moving forward.

Candelario’s progress was not just at the plate. He did commit 26 errors in his 121 games at third, but considering he committed 20 errors in just 59 games with Boise the year before it isn’t hard to see some evidence of progress. Counting errors is not a great way to measure defense, but in this case the scouting reports back up the numbers. There are still some questions about his ability to stay at third long term, but those questions are much quieter now than they were a year ago. Now the questions have less to do with his ability to handle the position and more with his ability to find some playing time there in an organization that is simply loaded with third base talent.

Despite that affluence of third base potential, Candelario could force the Cubs into making some complicated decisions this season. He is showing many signs of being a hitter who could move quickly, but he will run into a log jam almost right away. That sort of thing is a good problem for any organization to have, and Candelario hasn’t made it a problem yet, but if he breaks out early next season I suspect there will be some conference calls in which Candelario’s name and future feature prominently.

We’ll start with the easy part. Candelario will open the 2013 season as the regular third baseman for Daytona. He’ll likely continue to have very healthy walk and strikeout rates, will not post a high average but will have a very good OBP, and will probably show more power than he did in 2013 (after we take into consideration league factors). He’ll continue to show improvements with the glove, but at the end of the season he will still likely have positional questions hanging over him.

But let’s say he performs very well. Would the Cubs accelerate him to Tennessee in mid-season?

They might. Candelario is exactly the sort of hitter they would love to have in the majors one day. As a patient switch hitter he offers two things the Cubs are lacking from some of their other high profile prospects – a high OBP and the ability to hit left handed. There is no need to rush Candelario, nor would there be any excuse for doing so, but there is little reason to delay him either.

And that brings us back to position. He is buried at his two most likely positions, third base and first base, but with a strong enough performance at the plate he could conceivably push the rest of the third base candidates who survive into the outfield and claim that job for his own. That is a tall order, though, because he has two current baseball-wide Top 30 prospects ahead of him and another guy (Mike Olt) who was a Top 100 the last time he was healthy still hanging around the system.

So what is the future for Candelario? Good question. His immediate job is to keep improving with the glove, keep developing at the plate, and to make the Cubs find a way to write him in to their future plans. He still has a lot of developing to do, but a major league debut at the age of 21 is very believable for this guy. His development in 2014, his age 20 season, should be one of the bigger stories to watch this summer.