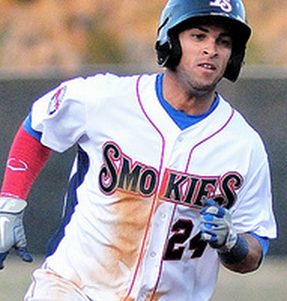 Among qualifiers (and before you ask, Javier Baez did not have enough PAs to qualify), the tenth best OPS in the Double A level Southern League belonged to a guy we have barely talked about all winter.

Rubi Silva has become somewhat of a forgotten man in the Cubs farm system these days, but that might be a mistake. While I doubt we should expect stardom from this outfielder, Silva is showing signs of perhaps being a very useful player for the Cubs in the somewhat near term.

But first, the disclaimer. The goal here is not to re-rank the prospects (that comes soon) or to assess the strengths and weaknesses of farm as a whole (that also comes soon). The goal for this series is to take each prospect individually, study the progress made so far, and see what we can learn about the future for that player.

So what makes Silva someone we don’t want to forget about? To start with, he’s a left handed batter.

Rubi Silva, OF
Born: June 6, 1989
Acquired: The Cubs signed Silva as a free agent out of Cuba. He was one of the first of the Cubs recent run of Cuban signees, and received a healthy $1.2 million bonus.

As a 24-year-old, Silva was decidedly on the older side of the fence for Double A position players, but given that 2013 was just his third professional season in the States, I don’t think we need to dismiss his numbers as simply those of a minor league veteran just yet. The highish age is worth noting, but that alone isn’t sufficient to tank his prospect status.

His walk rate, on the other hand, very nearly is. Over 126 games and 490 trips to the plate Silva managed to walk just 18 times. That is now his career high. His walk rate of 3.7% is the best he has posted with any team for which he has played more than twenty games. To it bluntly, that is very not good.

That he only struck out 20.2% of the time helps matters, but anyone who walks less than 4% of the time is going to find it tough to maintain much of an OBP as he moves up the system. That in turn, will depress his OPS.  It isn’t impossible that he can put up a quality OPS at higher levels with a very low BB%, but it certainly isn’t likely.

Silva hit 15 home runs for Tennessee and projects to hit about that many, maybe as many as 20, in the majors. He also stole 15 bases for the Smokies. That speed would be more useful if he were on base more often, but as is I suspect he could repeat that figure in Chicago.

At the end of the day, then, Silva is a left handed hitting outfielder with 15+ home run power, 15+ stolen base speed, an acceptable strikeout rate, and some serious walk issues. I suspect many of you are looking at that and thinking “obvious platoon guy.”

So let’s take a look at the splits.

That is pretty much the reverse of the line we would expect. It is possible that this is just a one year fluke (his career numbers show a conventional split), but it is also possible that Silva is a reverse-split guy. That doesn’t lessen his value in a platoon situation, but it does mean that it might be a mistake to pigeonhole him as a platoon player right away.

At the end the day, though, whether as a platoon guy or a full time outfielder, we come back to that walk rate.

His winter league numbers (sample size alert) are not encouraging with just 3 walks in 24 games. On the other hand, there is clear BB% improvement between 2012 and 2013. What’s more, in August he not only posted his best monthly BB%, a healthy 7.2%, but he also put up a very nice OPS of .829 and a wOBA of .385. Random fluctuation? Or a player responding to coaching?

If Silva is improving his approach at the plate in such a way that he will emerge as as a more selective hitter, I think his combination of power and speed should make him a potentially valuable guy in an outfield platoon. On the other hand, if the apparent improvements are simply statistical mirages I suspect Silva is a season or two away from the AAAA label.

Look for Silva to open this season in Iowa, and I think he will put up some healthy numbers there. The key number to watch will continue to his BB%. If that figure comes up, we could be looking at Silva as a fourth outfield candidate by the second half of the season. Whether or not he can hold on to such a position as the rest of the Cubs big bats start to arrive in the majors remains to seen.

Photo via Smokies on the Radio and Roger C. Hoover