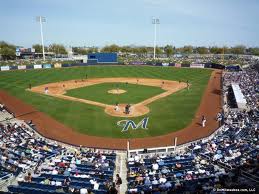 The Cubs play their second game of the day – the first, a so-called “B” game, which means it’s a fake fake game, is underway right now against the Giants, and featuring many youngsters (I’ll have notes from that one in the Miscellany piece later today) – against the Brewers in Maryville this afternoon.

Eric Jokisch will get the start, and although the lefty is slated for AAA to start the 2014 season, it’s not inconceivable that he could see time at the back of the rotation at some point this year.

This game is available on MLB.tv, and will be shown on MLB Network starting at 4pm CT (I assume it’ll be a delay, as opposed to picking things up live). It’ll also be carried on WGN Radio.

The lineup features Javier Baez back in there at short, and Junior Lake once again in center. We’re also seeing a whole lot of Chris Coghlan early, and near the top of the lineup consistently, too. He’s among the top candidates for the final outfield job (particularly if Emilio Bonifacio is going to be making the team as a super utility player), so it makes sense that he’s getting a lot of time.