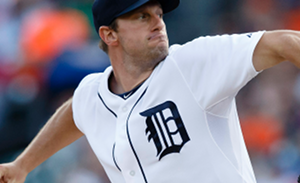 Just a few days after word that talks between the Indians and free-agent-to-be Justin Masterson have broken down, there may be another upper tier arm projected to reach free agency after this season. And, outside of Clayton Kershaw, it’s the biggest would-be free agent.

The Tigers have taken the surprising step of today announcing – announcing – that Max Scherzer has rejected their latest extension offer, and there will be no further negotiations until the offseason. That means that Scherzer will reach free agency, joining a starting pitching class that could also include Masterson, James Shields, Jon Lester, and Kenta Maeda (if he’s posted), among others. Perhaps we’re now seeing a shift back in the other direction after so many extensions were inked earlier in the year.

The Tigers say that they made an offer that would have placed Scherzer among the top pitcher salaries in baseball, though it’s hard to know just how high that means. He does seem like a safe bet to clear $20 million per year, though.

As I’ve said before, the Cubs would seem to be in an intriguing place to land an upper tier arm or two next offseason, given the strong need, the rolled-over dollars that went unspent this year, and a probably-protected first round draft pick. There are obviously some financial issues to deal with, but revenue could be trending upward as soon as next year, and 30-years-old isn’t all that old if you’re trying to complement a burgeoning young position player base with a quality rotation.