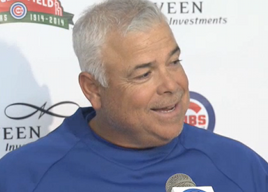 The Little Boy is home with me again today, and it turns out that he’s got pneumonia. That’s obviously a little scary for a one-year-old, but fortunately he’s still in good spirits and mostly just wants to snuggle (not that you’d wish for your kid to be sick, but, if he’s going to be sick, I can think of worse byproducts than him sleeping on my chest while I watch baseball). He also is being a good boy about getting his rest, so I should have near normal opportunities to write today (and I wrote a couple pieces ahead of time last night).