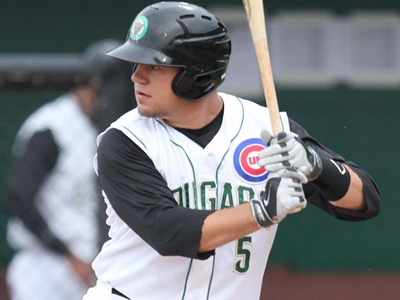 I’m still largely under the weather, but I couldn’t fail to at least mention this Kyle Schwarber tweet, which has set everyone off:

Thank you to the @KCCougars players, coaches and fans for being great to me in my stay here at Kane County! #cougs

The implication there could be that Schwarber, the Cubs’ top pick in this year’s draft, has been promoted once again. If so, that’ll make him the second straight Cubs first rounder to reach High-A Daytona in his first professional season – which is absolutely ridiculous. Note that, strictly reading, Schwarber could have simply felt like saying something nice about Kane County tonight.

We’ll see if he’s now been promoted to Daytona, or if this was just a matter of a guy sending out some appreciation, and then everyone jumping to a(n admittedly logical) conclusion.

And Sahadev Sharma drops the confirmation:

Can confirm that Kyle Schwarber to Daytona is happening

More on this tomorrow. But, for now: this is really swell.