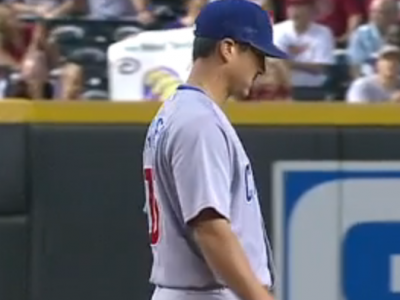 The Cubs designated infielder Darwin Barney for assignment last week to clear up playing time, primarily, for Arismendy Alcantara and Emilio Bonifacio. That gave the team 10 days in which to trade, waive or release Barney. The hope all along was that the Cubs would be able to move Barney to a contender, and Mark Gonzales reports that it’s on the verge of happening:

Darwin barney to dodgers should be finalized soon

We’ll see if the deal winds up indeed being finalized. On the Dodgers, Barney would not have a starting spot, but could serve as a nice bench piece all over the infield. I wouldn’t expect the return to be much here, by the way.

I’ll update this piece as more information on Barney is made available.

UPDATE 2 (1:38pm CT): Are the Dodgers just keeping Barney away from the Giants? I know that sounds a touch silly, but when you consider that the Dodgers already had Justin Turner playing very well off of the bench (he’ll be ahead of Barney), and the fact that the Giants had to turn to Dan Uggla to try and upgrade at second base … it makes you wonder.

UPDATE 4 (1:52pm CT): Gordon Wittenmyer says it’s a PTBNL coming back to the Cubs, which is about what you’d expect. The list probably includes some low-level, fringy prospects and organizational types. Hopefully we hear a little about the list, but this is potentially going to be one of those trades where you don’t hear much about it, and then we find out in November that it was settled up near the end of the season for cash. I say potentially. Barney’s value has always been pretty tough to gauge, given the elite glove and nightmare bat. If the Cubs wind up with a prospect that at least makes you go, “Oh, huh. That guy’s kinda interesting if I squint,” this is a win.

The most important thing here is that the Cubs did find enough interest out there to actually trade Barney, and now Barney gets to play for a playoff contender. Good for everyone.

UPDATE 5 (2:22pm CT): And the Cubs have confirmed the trade. Barney for PTBNL. I hate the idea of rooting for the Dodgers, but I hope good things happen for Barney.

UPDATE 6 (2:26pm CT): Perusing the official release from the Cubs, I see that the team included “a cash consideration” with Barney. So, they won’t be getting that full $830,000 in savings. However, unless Barney has absolutely no value at all, including cash in the deal could mean that the PTBNL list from which the Cubs get to choose is slightly better than expected. No, I would still not expect a significant prospect here – but maybe a guy who slots into the Cubs’ top 30 to 40 range is possible. And that ain’t nothin’.