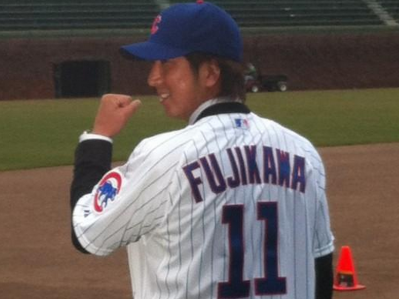 As expected, the Chicago Cubs have declined the $5.5 million option they held on reliever Kyuji Fujikawa for 2015. The team will instead pay a $500,000 buyout, making Fujikawa a free agent. That takes the 40-man roster down to 35 (though for our purposes, it’s actually at 37).

Fujikawa, 34, was the Cubs’ big bullpen signing before the 2013 season and it looked like they had scored on the international market when reports came from early in Spring Training that his stuff was looking great. And then he got hurt. Then he came back in time for the regular season, but his stuff looked shaky. Then he got hurt. Then he came back again, and started flashing some awesome stuff! … just in time to get hurt again. This time – well, each time, really – it was his elbow, and it required Tommy John surgery.

Fujikawa returned late in the 2014 season missing a few MPH, and it was clear he wasn’t quite all the way back. He might yet be a very good reliever, but at $5.5 million, the Cubs weren’t going to hang onto him. We’ll see if they try to work out a return of some kind, but the Cubs have so many power right-handed options at this point.

Notable: options decisions are not due until Monday, and the Cubs also have a $5 million one on Tsuyoshi Wada. Since they aren’t announcing that decision here at the same time, it’s at least possible that it is still being considered, and/or a pick-up-option-then-trade is still possibly on the table.