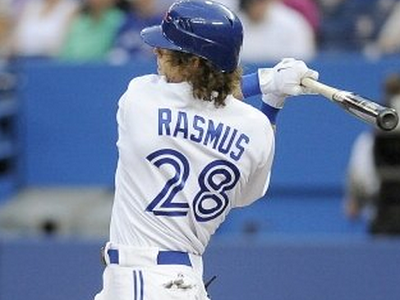 There was a time when Colby Rasmus looked like a future superstar. At 24, he was coming off of his second straight great season with the Cardinals, making good on a lot of prospect hype, and he looked like a guy Cubs fans would be hating for a decade.

And then the Cardinals traded him. For Edwin Jackson.

It was a little strange. But, the Cardinals rarely being wrong about such things, appeared to have sold high on Rasmus, who thereafter struggled in two of his three full years in Toronto, after a down year in 2011.

Now Rasmus presents one of the murkier free agent stories in recent years, and according to a report out of Toronto, the Cubs are getting involved in that story. According to Shi Davidi, the Cubs are one of many teams showing interest in the 28-year-old center fielder, and have recently met with him.

For the sake of discussion here, let’s assume the fact of the meeting is correct, and the Cubs have some measure of interest in Rasmus, even if it’s just exploratory at this stage.

But about that salary. In the pre-offseason predictions, the contract for Rasmus was understandably all over the map (see Heyman, Cameron, and FanGraphs crowdsourcing), ranging from one year and $9 million to four years and $50 million. Each of those extremes seems silly, but something in the three-year, $33 million range seems very plausible.

Is that too much for what Rasmus would bring the Cubs?

To my mind, if that’s the kind of deal Rasmus would actually get, it could be worth the gamble given where the Cubs are right now. With other additions, the Cubs have put themselves squarely in the position to be competitive in 2015, and marginal wins are hugely valuable to them (and additions on the offensive side seem more critical at this point than on the pitching side, especially in the short term). Maybe Rasmus is a total bust, but is $10 to $11 million going to kill them for a few years? Well, maybe not “kill,” but it would probably sting in the next couple years of relative financial tightness.

The upside on Rasmus, however, is pretty significant. Further, three years of Rasmus, as a quality defensive lefty bat doesn’t necessarily have to block any prospects (even moreso on a shorter deal). Worst case, perhaps Rasmus becomes a very expensive part-time outfielder who provides a little pop off of the bench and defensive value.

All that said, there’s clear risk here, and I don’t want to downplay it. Rasmus has had a couple incredible seasons (each of which came with an enormous BABIP), one of which was five years ago, and they have a bunch of meh sprinkled around them. Rasmus, in some ways, is a very pricey lottery ticket (hence the salary projections being all over the map).

I didn’t expect the Cubs to be pursuing Rasmus this offseason, so I didn’t devote a lot of time to wrapping my head around the fit. But now that the Cubs have added very effectively to the roster, the potential fit has come a little more clearly into focus.

Perhaps the Cubs merely see the potential opportunity for a value signing if Rasmus’s free agency drags on much longer into the offseason (it’s already pretty late for bats, actually). The Cubs can stay in contact, and stay involved, and see what shakes out. You never know if perhaps Rasmus will have to settle for a bargain, or maybe even looks for a one-year pillow-contract to springboard into free agency at age 29. If that is the case, then suddenly I can’t think of a better fit for the Cubs than Rasmus on a one-year, make-good deal.

I don’t think Rasmus will have to sign that kind of contract if he doesn’t want to, but, if that’s his preferred route, it’s not too often to you can roll the dice on that kind of 28-year-old talent with upside and commit to no more than a year (and not give up a draft pick (and maybe get a draft pick, yourself, after the season)).