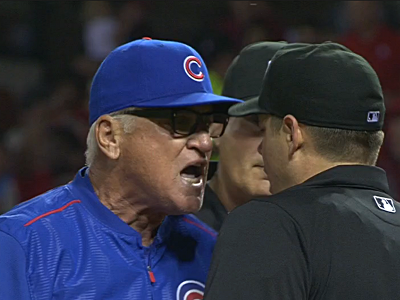 It’s a time-honored tradition among fans to complain about the umpire’s strike zone. It always expands when the fans’ team is up, and always contracts when the fans’ pitcher is on the mound. It’s just something fans do.

Managers do it just a little less, but when the calls start to get egregious – as they did last night, especially on the outer edge with the younger Cubs hitters – they can get riled up. So it was with Joe Maddon last night, who was ejected in the 6th inning for arguing balls and strikes. You can see the video here, and you don’t have to be a sophisticated lip reader to see what Maddon’s beef was: “You’ve been [bleeping] my young guys all night.”

Indeed, here’s the map of pitches for Cardinals starter Lance Lynn, who pitched through the 6th inning (from Brooks):

Those called strikes way outside? They came predominantly against Jorge Soler, Kris Bryant, and Addison Russell.

In “fairness” to the ump, we should point out that the zone for Jon Lester also had some pitches way out of the zone called strikes:

It was just a bad zone all night.

That said, I think Maddon was totally right to go off like he did, because the last thing you want is your young, patient players – who have very good eyes for the zone – to start feeling like they have to change their approach because the zone is getting huge. Maddon’s stand last night was as much about giving an earful to that ump as it was about sending a message to his young players: you’re doing fine. Keep doing what you’re doing. Don’t change a thing. This guy is nuts.

As for what Maddon actually said after the game, you can read his comments at Cubs.com, CSN, and ESPN. In short, Maddon felt like his young players were not getting fair treatment, and suggested that the veteran battery (Lynn/Molina) could have had something to do with it. Maddon called the strike zone “egregiously bad,” and said he wasn’t going to take it any more. He also said that he was impressed by how his young guys handled things, not showing frustration or taking it up with the ump themselves.

In the long run, this was a good thing. The players know Maddon has their back, the issue is on the table for the ump(s), and nobody needs to change anything they’re doing at the plate – at least in terms of the strike zone.